The animation Global Vulva connects female figures and vulva symbols from different times, countries and cultures, while they morph into each other - the cultural meaning of the female genital becomes visible again.

You'll see paleolithic engravings, the Greek goddess Baubo, a winged woman from an ice-age culture in Siberia, an Irish Sheila-na-gig, drawings of vulvas and of their symbols, the Indian goddess Kali and a Yoni stone, the Tibetan goddess Naljorma Dewa, a statue of a noble ancestor of the lwena in Angola, the Aztec goddess Mayahuel, the Black Stone at the Kaaba in Mecca, a double-tailed mermaid from a church in Tuscany, the protecting Dilukai from Micronesia, hands forming the mudra 'Lotus and Bee' in a labyrinth, an amulet of the Egyptian goddess Hathor, a winged sun disk, and the oldest human figure ever found, the so called Venus of Hohle Fels.

Otherwise separated visualisations are interweaved, resulting in a more complex and global view on their symbolic levels.
Director
Myriam Thyes 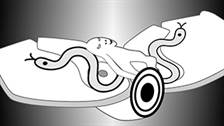 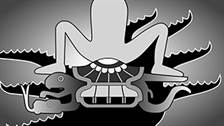