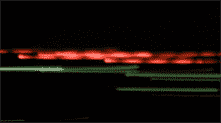 4:25, 2010, Video Art
A flash a clunk a scintilla a thump a coruscation a pounding an agitation a stillness a silence Feuerwerks builds a dialogue between musical pitch and visual playback speed. A non-linear relationship between sound and visuals is constructed, as they co-define each other structurally; pitch controls the visual playback speed, which in turn controls the rhythm of the music. The result is a mesmeric collage of staccato blips and sustained movements as time is flexed.
DirectorJames DooleyCameraJames DooleyCountryUnited KingdomEdition2013 < overview

Who is James Ralph Dooley?
A digital artist and creative coder from Birmingham, UK.

What is Feuerwerks about?
Feuerwerks looks at finding a way to control the manipulation of film with sound. The original film was split into segments one second in duration. The score structures the visuals by determining the playback speed for each segment of the film. The result is an erratic dialogue between the two.

How did you start with film? And do you have an educational background in art or film?
My background is in sound and music. Feuerwerks was my first adventure into film. With it I wanted to use what I was experienced working with (sound) to control something I had no experience with (visuals).

Could you explain how you work, what themes or concepts you use and what is important to you?
I"m very interested in combing strict structure with chance. I often create rigid plans when creating work, then work intuitively with material. A rigid plan often leaves plenty of room for intuition and freedom to play a great part in the create process if you"re only controlling a limited number of parameters.

How long do you usually work on one project?
I"m a very slow worker. Most projects take 4 or more months. I"m usually working on more than one thing at a time, so this probably explains why things take so long to finish.

Do you carefully plan the production process or do you work more intuitive?
Both!

How does the title relate to the work, and how do you find a fitting title?
I hate titling my work. It"s the hardest part of any work! The title Feuerwerks comes from wanting to create a work where sounds and visuals scintillate. Fireworks sonically and visually pop and crackle.

Where do you get your ideas or inspiration from?
Anywhere and anything. Lately, I"ve been researching complexity theory and the concept of emergence.

How important is sound in film, and if you use sounds, do you create your own or use existing?
I don"t think that anyone thing is a must have feature in my work. If sound is necessary, then I will use sound. If I need to compose my own soundtrack, then I will do so. I very much take the approach that each work is an individual and must be approached with this in mind.

Where would you place your work; cinema or art. And what is the difference between those according to you?
Art.
< overview< Artists interviews