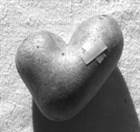 4:00, 2006, Animation
Corazona is about love. It definitely is linked with my life but this I only realised after it was done.
DirectorAndreas MehringerCountryGermanyEdition2006 < overview

Who is Andreas Mehringer?
I was born 1975 in Bavaria, the south of Germany. I became a musician, first playing, now composing music.
Since 6 years I live in the Netherlands.


Why filmmaking?
I like to create, to express. Normally I do this in music. The idea for that film came unexpected. (I did not have the plan to make a movie) At that time there were lucky circumstances so I really could do this movie.


Corazon is about...
Corazona is about love. It definitely is linked with my life but this I only realised after it was done.


Financing your movie?
There was no attempt to get any financial support. The actors, Ainoa Miranda and Renard Aust participated in the film. As it has been a project between friends there was no money involved. The litlle things that had to be paid I paid.


Do your films have style, just as some painters have?
There is no style. I just try to do the things as good as possible using my imagination and intuition.


Influences?
The film "songs from the second floor". Later I found out that it partly had to do with the static camera positions.


Individual film making or co-operation?
Both can be good. It just has to work. My speciality is music.


Your plans and dreams...
Quality!


Did you ever had another ambition in life than to become a filmmaker?
Become a musician.


Digital or classic?
I have no preferences. I don’t have any equipment.< overview< Artists interviews