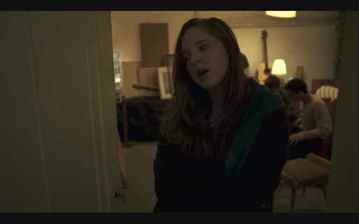 What is Arik about?
Arik is about a teenage tom-boy that is sick of being one of the guys and wishing for the opportunity to ’come out’ as a girl in front of her buddies.

Could you explain how you work, what themes or concepts you use and what is important to you?
My actors were 16, 17 years old, inexperienced, and I worked hard with them on building and understanding their characters. I made a lot of improvisations while rehearsing. A week before the shooting I didn’t have an ending for my script and on our last rehearsal as a part of improvisation, I whispered in my actresses’ ear and I told her - go kiss Yonatan instead of Rafi. The boys didn’t see it coming and right before my eyes, from their improvisation on the new turning point - I got my ending. They knew their characters so well that they acted by them while improvising so they practically wrote the ending for me in acting it, and it kept the script very organic.
I knew from the beginning that choosing young actors means lack of concentration, so I took a decision that there will be no film lighting gear at all on the set. The room was lit with a net of yellow bulbs we constructed on the ceiling. It saved a lot of time on set preparing for every shot, and kept my actors focused because they didn’t have to wait a long time while we prepare for each shot.

Where would you place your work; cinema or art. And what is the difference between those according to you?
According to me art is not necessarily for everyone, but cinema is. In my work I hope to address not only a critic but the most uneducated person and hopefully make him enjoy my work without feeling he needs to be educated in some sort of way, and just touch him by telling him a story about humanity, in the most simple way.

What is your next project about?
A romantic comedy about a crazy family of mixed Russian and Moroccan blood.
< overview< Artists interviews