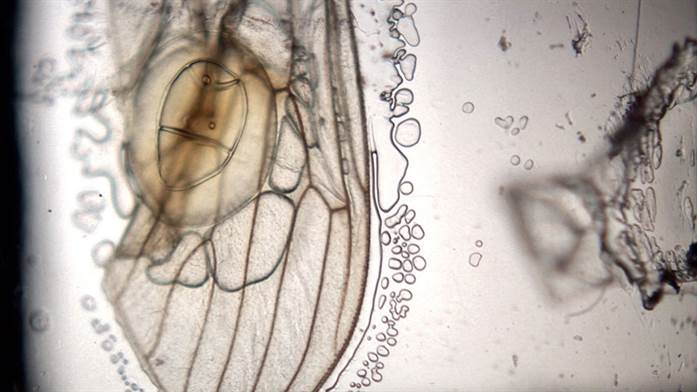 2:52, 2013, Experimental
Celluloid Warfare ii is an experimental moving image work focused upon several ideas. In one sense it is a visual experimental journey that discovers and plays with the notions of the celluloid surface, the ways specifically it can be physically manipulated. In another sense it is a study of image and sound, every visual detail is paired with its own unique sound sample. During the creation of the work I had been thinking a lot about [[synesthesia]], specifically the ways in which perhaps a movement can conjure its own unique sound, especially a more abstract interpretation playing with the human senses and cinema.
DirectorSam SpreckleyProducerSam SpreckleyCountryUKEdition2013 Compilation program (2006 2014) 1/3ScreeningsBraunschweig International Film Festival, Germany, November 2013< overview

Who is Sam Spreckley?
Sam Spreckley is a Scottish visual artist, floating around, making video works and sound pieces, exploring the hidden poetry of life!


What is Celluloid Warfare ii about?
Celluloid Warfare ii is a sort of continuation of my interest in how sound and image relate to one another... The video is constructed from 8mm celluloid and insect parts which both are pushed to their limits physically through a modified projector, the results have been recorded live and edited digitally together to create this piece! The work tries to suggest a few different feelings or thoughts cinematically. The first area which i find the most interesting is in the physicality of the celluloid medium, how as an artist i can destroy and push the very limits of the material, i find this process endlessly fascinating and the textural results are beautiful. The second area which drove the creation of this work is in how by giving unique sounds to these moments of destruction a completely new and abstract sense can be created. Something familiar yet completely unfamiliar can be created, especially so in a cinematic sense.


How did you start with film? And do you have an educational background in art or film?
I studied at an art uni here in Scotland where i would also obtain a masters degree in science. This was after becoming very captivated with using video and film/sound to capture things i came across in everyday life. I had always been interested in photography so making films was a natural step. The themes of my work have evolved over time, especially this interest in sound and image.. Where these themes come from is a mystery still, i think simply being a human and experiencing the world in a different way has always been fascinating for me, i love to experiment with cinema in an artistic sense.


Could you explain how you work, what themes or concepts you use and what is important to you?
The most important thing for me as an artist is to continue to feel free to explore new ideas in a visual sense, to not feel like i should make a certain thing or style and to simply follow my curiosity. The themes of my work circulate around a small number of areas, the hidden poetry of life, the relationships between sound and image and how science and art can be found next to each other. The way i work is very rough and intuitive, one work generally tends to lead to another, ideas come from my continued experimentation with film and video. The way i work is also usually very lofi, this is why i like to work with more analog formats, cellotape and glue..


How long do you usually work on one project?
This varies but to be honest, i like to work on projects in a short time. The concepts to my work are thought about for a much longer time in advance, then once i have a concrete idea the visual/sonic aspect comes very fast. I like to spend less time making something "perfect" and to just get quickly to the core of the current idea.. Rough around the edges but strong concepts...


Do you carefully plan the production process or do you work more intuitive?
I would say it depends on the project but generally i work in a much more intuitive way, after many years of learning and refining my editing skills i can now trust my intuition which allows for me to work with much more speed and efficiency.. As i mentioned above, i think a lot about my projects before i begin producing them physically, so when it comes to the actual production, i can achieve my goals much quicker, i have this idea of the project very clearly in mind, this also allows for a much more intuitive production.


How does the title relate to the work, and how do you find a fitting title?
I always struggle with titles, if i didnt feel so bad most of my works would be untitled! But sometimes a title comes and sticks with me, this is the case with this particular work. This video work is the second in a series, hence the II part. The first work was similar in a visual sense but the soundtrack was much more specific, instead of an abstract composition we would instead hear explosions, war sounds, machine gun fire etc, general warfare.. So the title celluloid warfare sort of stuck. At the time i was very interested in attacking film, destruction, basically warfare! I found something quite fascinating with this idea of Celluloid Warfare... It stuck for the second part of my series


Where do you get your ideas or inspiration from?
My inspirations come from everywhere! I could write about the specifics in great detail but perhaps that is for another time... Right now im inspired a lot by the Cassini space missions, the planet Saturn and everyday life, nature, unplanned encounters.. Very various


How important is sound in film, and if you use sounds, do you create your own or use existing?
The sound is very important to my work, in fact, i would say it is the most important and usually the driving factor of my artistic interests. Most of my video works are based upon the relationships between sound and image. 99% of the time i create/record my own sounds. This is an area of my practice that i absolutely love, the physical act of finding and recording sounds.


How does content relate to the form of your work?
Im not sure i understand this question? The content of my work usually dictates the form, this is especially so in this film. The sequences informed how the work was edited... I usually dont plan such things as how the edit may be, it relies heavily on the recorded material, a sort of intuitive jigsaw puzzle


What possibilities of the web are yet to be explored?
Hmm, tough question... I think the web offers so much for an artist, and im constantly amazed and inspired and scared by it. It has given me so many troubles and opportunities, incredible! I think in a general arts sense the web offers many many unknown possibilities, off the top of my head i would say human connectivity and collaboration, producing artworks remotely, without ever having to travel to work..


Did the web changed your view on art, or your career?
It certainly did! Not so much on my view on art but definitely on my career. It opens up so many avenues for both research, inspiration etc but also on discovering opportunities. I would say the web has revolutionized how digital artists create and reach people. Working with such ephemeral mediums the biggest problems can be to get an audience, with the web (for me personally) this boundary has been smashed open. Now an unlimited number of people can experience my work if they choose. There is also the curious area of serendipity found with the internet... It also has down sides, like most things.. But for me so far the positives of the web outweigh the negatives..


Where would you place your work; cinema or art. And what is the difference between those according to you?
My work sits in this unusual space between the gallery the cinema and the internet, sometimes i describe my work as expanded cinema other times i describe it as gallery based art, it really fluctuates.. I think there is a very symbiotic relationship between both. Im happy for my work to be experienced in any setting. The biggest factor for me is in the display of my work, if its in the cinema its big and loud which suits it very much! Especially concentrating so much on sound, whereas sometimes in a gallery setting i find it has less power, a smaller screen with headphones? This is my biggest gripe with the gallery space.


How influential is the reaction to your film by the audience?
The audience reaction, hmm, that is also a complex question. I would say two things, the first is that i love to hear from audience members, especially so in a cinematic sense, i make my video works as a lover of the silver screen and cinema in general, part of me wishes to entertain, to create a piece of cinematic work which people watch in awe or confusion or immersion, on the other hand i always try to create the work just for myself, to try and not be influenced by audience expectations, to feel free to create without the pressure that my work must make sense and be "wow" and such like, so its a tricky question :) but i cant deny that the audience is very important regardless of my personal opinions...


What is your next project about?
I have a few projects coming up, I"m still working on a project about science art and music and i have a number of shorter more experimental works about the human condition.. Besides this i work on a freelance basis so expect a few other random more commercial projects..
Thanks for the great festival
Best wishes
Sam
< overview< Artists interviews