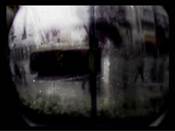 Silence and electro-acoustic noise are the main components in the three suites of "InharmoniCity", and inspiration was drawn from the avant-garde technique of worldizing - recording and re-recording samples in various surroundings while tweaking the setting of speakers and microphones - which results in a complex, three-dimensional canvas. This way it is possible to realize several effects, i.e. The classic Doppler, by quickly moving the microphone in front of the speaker, so to vary the frequency of the soundwave (to observe this phaenomenon directly, simply listen to the different sound frequencies of a siren when it gets close and then far away).
In the track "Girl Running" a dialogue is established between the sounds synthesized with Xenakis’ UPIC and the sound outputs of invisible electronic objects. By carrying these magnetic fields into the audible range, the sounds have been suspended, intimately researched, orchestrated, in order to cross the physical borders of aural perception.
The second work "Invisible Words" takes its name from the fact that most audio sources in this track come from the typing of an old Olivetti typewriter. These recordings, after being processed using micro-montage techniques, have been presented in different metaphors.
The most interesting maybe, appears in the final phase (last 4 minutes), where a quiet stream of structured pulses mimics, in an almost onomatopeic manner, the attempt to emit a sound/word with a closed mouth, a painful besides impossible action, almost as if they were invisible words spoken inside the same mouth.
< overview< Artists interviews