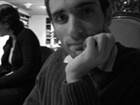 4:20, 2006, Video Art
Rua Jean Zay C99-02 is a dreamlike film about memories of distant or bygone places - or gradually fading out - about memory of architectural space and the imaginary drawn from it.

RUA Jean Zay C99-02 also borrows from the documentary genre: all the shots, documents such as the 16mm film found at the "Groupe d'Etudes Cinema" are genuine and witness history of the halls.
DirectorOliver RuelletEdition2006 < overview

Who is Olivier Ruellet?Well, I"ve always had a good pen work and have been a keen drawer since the age of 10. At 18, I went to Paris to study art & design at the Olivier de Serres art school. I had planned to become a product designer until I realised I wasn"t fit for the job - or rather the job didn"t appeal to me anymore. This is when I moved to Britain and started making short animated films and other screen-based work, enjoying myself a lot more... Today, I see myself more as a digital artist, sharing my time between teaching in Higher-Education and making self-produced short-films and experimental digital artworks.

Why filmmaking?I think it all started after I went to see an experimental and independent film festival called Némo, 4-5 years ago (It takes place every year in Paris, around April); There I saw a retrospective about the work of Michel Gondry and plenty of other fantastic shorts, and I remembered being amazed by what was possible with low-budget film-making. I immediately started filling sketchbooks with
Ideas and storyboards, as I still do today.

My work is about...It"s difficult to find a single line along which to talk about my work; I"m certainly interested in the relation image/motion/music, which I have explored in my first two films (the Metrosoul movie and Travel Patterns) through the metaphor of travel. My recent work is really personal and introspective, dealing with memory and place. I have tried to represent my take on the environment I lived in for three years (the Parisian suburbs) using the medium of experimental film-making. I"m now exploring other supports for the same idea, such as interactive media and 3D virtual environments.

Financing your movie?I haven"t really looked for funding at that stage, perhaps because I make a living mainly from teaching at the moment and I see film-making more as a sideline than a proper full-time job: I"m doing it by passion, clearly not for the money. I like to think I"m still an amateur! Luckily I didn"t have to pay anyone or spend any big money to make these films, but I"m aware that for anything bigger I will need to consider the financial side in the future.

New Media; a challenge for film makers?New media can only be good news for independent film-makers like me: Like in many domains it has shifted the traditional balance between the artist, producers, distributors and viewers by cutting the middle-man and encouraging independent productions. Nowadays, the internet is inevitably an ever-growing source of contents as well as an unprecedented exhibition space for individuals
Or small organisations. All my productions are downloadable from my website and distributed under a Creative-Commons license. The only pitfall to this is the difficulty to make it a viable economical model - but it is far from being my concern right now.

Which film related websites do you frequent?videos.antville.org is definitely one of them! It"s a community weblog for shorts and commercials, good or bad. In the UK, tank.tv and Shooting People are also good places to check out. For artists films, 312.ca is my favourite. If I want to find copyright-free footage, I go straight to archive.org. That list wouldn"t be complete without a word about my friends from 7 Inch cinema (7 Inch cinema).

Individual film making or co-operation?I am a visual person by background, so it"s natural that I quickly developed animating and story-boarding skills. I also do the editing and most of the directing in my films, but I"ve never touched a sound mixer in my life. I"ve always been helped by someone (musician, producer) for the soundtrack. Ideally, I think I work better in a small team, because I can"t be good at everything!

In the future...My ambition, if this is one, is to carry on doing what I"m doing! No strings attached, no obligations, just pure passion! Maybe I"d like to get into bigger projects, involving more teamwork.

Digital or classic?I don"t really have a preference; I tend to work out things out of necessity, using what I can. I have got the chance to work in a university where I can borrow most the equipment I need, so this is not really an issue for me. I"m not into the divide between traditionalists and radicals; Incidentally, I use DV because it"s cheap and reliable.

View other work of Olivier RuelletAll my current work is published on my (website) and there is some more to come. Stay tuned.< overview< Artists interviews