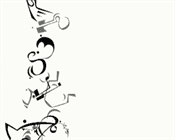 
All other remarks
This film is done for Triboro Sound. Triboro Sound is producing a performance project combining music, film, modern dance and other artistic disciplines. < overview< Artists interviews