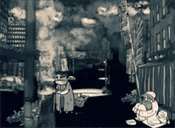 Gokhan Okur - Off the phone

Who is Gokhan Okur?
Gokhan Okur is an illustrator, animator and a visual performance artist. Lives in Istanbul. Used to be an electronic engineer but it was such a boring job that switched to art field.


How did you start with illustrations, and do you have an educational background in illustration/design/art?
I started illustration in high school. Then went to university for studying electronic engineering. After I got my BA degree I had a master’s degree in visual communication design. I am mostly self thought animator and illustrator.


As an illustrator, was it easy or difficult to jump to animations?
Actually it was easy, within the digital tools like Flash and After Effects you can animate your characters smoothly. Key frame animation is tough but gives more spirit to characters.
Big difference to draw for animation is; you have to think how the character is gonna move and act.


Where did you learn to make animations?
I learned how to draw and animate by myself. Started with Flash 4, I was only moving symbols across the stage. Step by step I developed my skills.


What materials do you prefer to work with when you’re making an animation?
Working with digital media is so flexible. Easy to modify and experiment. I am not willing to go back to traditional media. But I am experimenting with a lot of software which are not related to animation field like artrage and alchemy.


How is the art scene nowadays in Istanbul, and are there many opportunities for young artists?
I am a little bit off the art scene in Istanbul. But as far as I know it is no good for illustrators or animators. Istanbul is overflowing with conceptual art. We only have two galleries featuring street art, illustration etc. Virtual mapping is rising, new media and interaction design is rising also. But they could not find any commercial space or value.


You said in 2006 that your primary ambition was to become a more skilled illustrator, how did that work out?
My illustration skills improved a little bit for the last two years but I achieved huge steps in animation.


You also said that concept would become more important than the craft of filmmaking, how do you look back on that now?
Hmm right now I believe it is 50% 50%, without a solid concept your best work becomes garbage vice versa. But good concept is every where, everybody have great ideas, it is hard to execute those ideas with a suitable craftsmanship.


Your latest film "Off the phone" was released just couple weeks ago, how do you feel now it’s finished?
Off the Phone released in the first week of June. I am glad that it is finished now. It was a long and tiring journey. Now I am wondering what will be the feedback, I hope people will like it.


Where did you get the idea for "Off the phone" from, and how long did you work on this film?
"Off the Phone" is actually a music video that I made for the rock band called Jigsaw Soul based in New York. So they gave me the concept, they explained what they have in their mind and I started to work around given key words. It took 3 months from beginning to end.


Did you have to improvise a lot during the animation process?
I improvise A LOT. I don’t like working with storyboards, it is not because I think they are useless but I am only very lazy to draw them. I use time coded script to follow the process. So with each scene I had a sentence to visualize and you have endless options how to build that scene.


What came first the idea for the visuals or the music?
For personal projects visuals comes first. My life is not blended with music. I hardly listen to music in my daily life. I don’t own a mobile music device for example. Visuals has been the primary target in my whole life.


How important is the reaction of the audience?
It is really important. Audience is the king. You have to catch them, surprise them, astonish them. It is important to be remembered after a few days.


Many of your films have a dark suspense or critical elements, could you explain?
I know how to handle dark concepts. I am better in suspense then comedy. I have difficulties about defining what is fun in animation. Creating dark moods comes more natural.


Do you have future plans to experiment with other genres, such as fiction or documentary?
I will keep making animations. In animation you can control everything, don’t have to deal with people or equipment.
< overview< Artists interviews