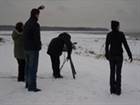 10:00, 2006, Narrative
The story is about a spirit that looks back at the final hours of her life before she
committed suicide.
DirectorNiels NeeskensEdition2006 < overview

Who is Niels Neeskens?
I am a 25 year old Dutch man/ boy (like my mom still calls me). I grew up in the east of the Netherlands in a city called Almelo and lived there till I went to live in Groningen for 6 years to study. First I studied 1 year of ‘Bewegingswetenschappen’ (movement science) at the University (RUG) and later a study that fitted me better called ‘Communications’. I always had in mind to finish a ‘normal’ study first before I was going to chase my childhood dream ‘filmmaking’. The reason for this was to have something to fall back on, when for some reason it wouldn’t work out in the movie industry. After I graduated in 1995 I went to the European Film College in Ebeltoft Denmark, where I still am at this moment (till may 7th). I wanted to develop myself in the craft of Directing and scriptwriting, but I also did a lot of producing jobs at the side. After I come back I begin in my production company ‘NIE Productions’ where I will do big and small film projects.


Why filmmaking?
Describing my passion for filmmaking is like describing your feelings for the love of your life, realy difficult! My whole life I had a great imagination and fantasized a life next to my ordinary own life. Not because I had a tough and terrible life, on the contrary, I have had a wonderful youth but everywhere I went I saw a story to tell. A walk through the forest with my parents became a walk with elves and gnomes and sometimes a big bad wolf was following me. My fantasizing never stopped and when I grew older I started to write down the stories I had in my head. But it never satisfied me. I wanted to share my stories with people around me. In little shows I had a change to express myself and filming it with a camera gave me the opportunity to capture it and show it to more people at a different time. Later on with the technology and the upcoming of the computer and the opportunity to edit a movie at home, I started to make short movies with friends. It became an important factor in life for me and still is.


Memories of Redemption Day is about...
The story is about a spirit that looks back at the final hours of her life before she
Committed suicide. We witness her last thoughts about life and we see her perception of the way she sees things surrounding her in daily life. You see a confused young woman who is not able to see the good parts of life anymore. Images of pretty things in life (love between boy and girl for example) are all seen in a bad, twisted way.
The theme suicide is something that has intrigued me my whole life. My family is confronted with relatives that saw this action as the only way out and I have known other people who sadly enough did it. I was speculating about what a person who is about to commit suicide would think just a few hours before the action. What would go through their minds; angry about the world, sadness of life in general, happiness about the upcoming ending or a combination of it all. I began to write a story and transformed it into a script for a short movie.


Financing your movie?
I shot the movie during my stay at the European Film College. It was an extra project and we made the movie with part the equipment of the College and part our own. The crew was entirely students from the college and therefore the only expenses we made were catering, tapes and transport costs. Postproduction was also at the College so that was without any costs too.


New Media; a challenge for film makers?
New media is definitely not overrated. We reach our audience more easy with for example showing our latest work on internet sites (like streamingfestival.com). We can show our capabilities by showing our portfolio online and market ourselves that way. The gap between filmmaker and audience is a lot smaller because of the new media. Besides that it is a great learning school for young, beginning filmmakers and old experienced ones. Because of certain internet sites you can learn a lot about the craft of filmmaking. Forum sites give you the change to share your visions and knowledge and to learn from others. Especially with the latest development of high definition internet is more up to date and quicker than books.


Do your films have style, just as some painters have?
For this film I choose a sad, depressing style to emphasise that it is her world we are in. We see her interpretation of the world through her eyes and therefore the colours are grey and dark. All the aspects that make the movie show the mood she is in. Besides the colours it is shown in the music (goes from sad to more happy towards the end to feel that the solution/ freedom/ending is there), camera angles, acting and time (editing wise) taken for the shots.
For every project I have a different style in mind, all depending on what the heart of the story is. Maybe a general thing in my projects is that I seek for the emotion. I love images that speak for themselves without explaining them or show too much of it to make people get it.


Influences?
I can’t say that something particular influenced me to make films. My mother photographs a lot and this is something that always caught my intension. I grew up around her making pictures and telling stories with the pictures in numerous photo books. But other then that it was my fantasy (like a talked about in question: Why filmmaking?) that got me into it.
A film that really inspires me nowadays is ‘The Shawshank Redemption’. To me this movie stands for absolute brilliant filmmaking. Every scene is a story on its own and has a lot of emotion in it. It is the perfect mixture of suspense and emotion. It gets me every time and is a example for me of how a story has to be.


Individual film making or co-operation?
Off course co-operation. Filmmaking is whatever you want a team effort. Even the smallest fiction or documentary needs a well trained team that can work together to make something really good. It is nice to shoot a home video from your child with a mini dv, but if you want excellent sound, nice camerawork etc. You have to work in a team of specialists. It is really hard, and I experienced it a lot of times, to give work in the hands of somebody else. As a writer you want to direct your script, because you have the story in your head, as a director you want to do the camera because you have the shots in your head etc. Etc. Eventually it won’t work like that. As a director you have to trust your camera person to make good shots and so on. A director oversees the whole operation but has to trust his or her crew in doing their job. There are not a lot of Robert Rodriquez out there who direct, produce and edit the film by themselves and even less who make something good out of it.


Your plans and dreams...
As I briefly told in the opening I am starting in my own production company ‘NIE productions’. I will focus on doing small projects like short movies, video clips, video family trees, weddings etc. And bigger projects like company movies, feature films etc. Besides that I will provide news items for the local television channels in the area of finance and sports. All with the option to deliver the end product in high definition.
Mainly because the film industry is poorly represented in the area where I come from, I am very driven to make something out of it. With a group of enthusiastic young filmmakers we are going to try to put Twente on top of the film industry (man’s gotta dream!).


Did you ever had another ambition in life than to become a filmmaker?
No, I can’t remember anything else than wanting to become a filmmaker. I played soccer off course and probably wanted to be professional in that, but apparently that feeling was not so strong that I still remember that.


Digital or classic?
Difficult. I would have to go for digital and then off course high definition, because I am most experienced with that. High definition nowadays is approaching film if it is not all ready there, but shooting on film has its charm and I hope someday I have the opportunity to work with it. It both got its pro’s and con’s. DV and high definition bring a more easy workflow, easier post production, in most cases cheaper and require a smaller crew, but shooting on film make you work more precise (because of costs) and therefore really prepared. The end result of shooting on film I think is still better then high definition. But high definition is the future and will wipe away film in a few years (didn’t they say that 20 years ago also).
For the production company I have this equipment:
Camera: AG-HVX200
P2 Cards: 2 x 8gb
Portable recording: Firestore FS100 of CinePorter p2 harddrive
Hardware: Power Mac G5
Software: Final Cut Studio 5.1
Storage: Raid 5 config
Schoulderhouder camera: DVRigpro
Zoomgrip: Zoe-DVX
Follow focus: Bebop Foxi
Statief + head: The Vinten Vision 3 of 6 Tripod System


View other work of Niels Neeskens
Check Nieproductionsfrom probably the end of may.


All other remarks
Reactions, feedback, questions through mail are welcome. I hope you will enjoy the short movie. < overview< Artists interviews