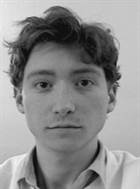 4:00, 2006, Animation
About one man’s experience with a new
computer. It is a short reflection on technological clutter.
DirectorPatrick MahoneyCountryUnited KingdomEdition2006 < overview

Who is Patrick Mahoney?
Age 24. I’m an engineer and not an artist by training, but
I’ve always enjoyed art and hope to learn more and keep practicing through
My life. Other engineers have commented that I’m too creative to be an
Engineer (which I disagree with; anyone and everyone should be creative),
But on the other hand I tend to take a very analytical approach to art, or
So I’ve been told.


Why filmmaking?
My film, "A New Computer", is about one man’s experience with a new
Computer. It is a short reflection on technological clutter and is closely
Related to experiences of my own life even if the main character is not
Anyone in particular. Another big inspiration for my film has been
Both the Free Software and Creative Commons movements.


Financing your movie?
My exceptionally low budget film required no special funding and had two
Participants, myself and my brother who volunteered the musical score.


New Media; a challenge for film makers?
The power to publish is now within reach of anyone with access to a
Networked computer. But old media serves a purpose offering pre-selected
Media that a wide range of friends may share. Obscure but excellent
Internet films require some effort to seek out, an effort that many seem
Unwilling to undertake. I would like to see more niche-appeal films as
Opposed to mass-appeal films become widespread, and I naively hope this will
In turn influence mass-media to produce more variety.


Do your films have style, just as some painters have?
Films in general certainly have distinct styles. I’m not experienced enough
To have fully developed my own style, but my sense of humour tends to be
Subtle and dry which probably affects my films.


Influences?
Many cartoons, books, and movies have captivated and inspired me, but I’m
Not sure I can pick out a few that had a direct impact stronger than any
Others. To name a couple though, I particularly enjoy the storytelling of
Roald Dahl and Bill Watterson’s comic strip Calvin and Hobbes.


Individual film making or co-operation?
I enjoy working alone and controlling the entire film, which is easier with short animations. I would probably enjoy working as part of team as well, but this is somewhat difficult due to a lack of friends sharing an interest
In filmmaking.


Your plans and dreams...
I would like to improve my skills and find the time to make more films and explore the art. Lack of time is the key obstacle and can be frustrating at
Times. Filmmaking is not my primary ambition, but I do enjoy it.


Digital or classic
I’ve only ever tried digital. It seems much less costly than real film,
Particularly if one already has a computer. Since I do stop motion, my camera is plugged into a computer and does not require any tape.
I own a computer, a webcam, some sound recording equipment, and a lot of free software on GNU/Linux, about as low budget as one can get.


View your other work
Unfortunately, I don’t personally have other work at this time, but my films
Are located at http://polycrystal.org/lego/movies.html< overview