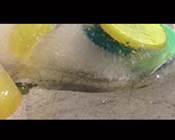 Olga Koroleva - Two and a half years


Two and a Half Years is about?
Essentially it is about loneliness and an attempt to catch up on the gap in the relationship with my once close friends. This is my most personal piece of work so far.


How did you start with film? And do you have an educational background in art or film?
It all started with an interest in manual photography about 4 or 5 years ago. Then, under the influence of the highly diverse London art scene and my art teacher at the time, my practice embraced painting and drawing. I was planning to continue working as a painter but while on my Foundation course I found that painting environment was very intense and not rewarding enough. This is when I started experimenting with video. About a year ago I made my first short film and since then film and video became my main pathway in art. Recently, however, I became interested in making installations and am planning to continue combining that with my film practice.


Could you explain how you work, what themes or concepts and what is important to you?
I always try to look for things, which are not easily noticeable. I craft the concept carefully in relation to the image to an extent where the two become almost inseparable. Whenever I am working on a project there will always be some psychological and philosophical concepts that I relate it to but they are not always apparent in the final outcome.

In terms of visuals (in Two and a Half Years in particular) abstracted, ambiguous images catch my eye, as well as images that incorporate movement in the object itself while the camera is still. If i make something with a lot of camera movement, I prefer to keep the movement of the subject matter to a minimum therefore establishing a balance between the camera work and the image. For me, one has to be stronger than the other, however, stronger does not mean more developed but more pronounced within a particular piece.

Sometimes my inspiration comes from books and stories (my recent short was based on The Heart of the Dog by Mikhail Buglakov).


How did the film come about? Everything (carefully) planned or more intuitive?
All the dates had to be planned carefully as there was a deadline for this film. I flew to my hometown in Russia to make thins film and I had just one week to arrange and shoot everything. However, this in itself was a great risk as the was no guarantee I would find the subject matter I wanted and the so needed support of other people, who, as i discovered, were willingly helpful. The weather conditions were perfect and I managed to get a lot of footage to chose from at the later stage. I prefer to have freedom to experiment when it comes to editing and do not like to verify every image during the shooting process. In the end some elements of the footage, which I filmed almost accidentally, suited the best for particular stories and the film as a whole, and others were left out.


How do you finance your projects (by yourself, sponsors or subsidy)?
Fully by myself. With Two and a Half Years the biggest spending was the plane ticket. Generally all I pay for are the mini DV tapes as I do everything else myself and I do not have a set budget. Although sometimes I wish this was not the case, especially in terms of equipment, as it would allow me to do more with my ideas.


New Media; a challenge for film makers?
It’s a challenge as well as a great advantage. It gives a wider range of media for ideas to be communicated and expressed, as well as more choice in the ways you want to show your work.


How does the internet influence contemporary art in general according to you?
Undoubtedly it makes communication of ideas and promotion easier and more accessible for a wider audience.


What possibilities of the web are yet to be explored? Which dangers do you see ahead?
One of the problems of the growth of online culture is devaluation of analogue forms of art, and as a result devaluation of live communication between people.


YouTube? Why or why not?
I personally use youtube to upload my short films, and also to share on-going work with people I know and get feedback or advice, which is incredibly useful especially with people who I do not see on regular basis.


Does your work often circle the festival circuits, and do you visit festivals regularly?
In 2007 Two and a Half Years was also screened at Portobello Film Festival in August and Dime Novel Screen in September, both in London. Streaming Festival is the first film festival based not in UK at which this film was screened. I plan to enter some international film festivals with my new work but the ones I attend so far tend to be in London simply because of the costs of visiting other cities and countries.


Do you often meet and discuss with other film makers through the internet?
Yes but they tend to be people who I know in real life.


What is your next project about?
The film which I made after Two and a Half years was based, as I already mentioned above, on the book called The Heart of the Dog and was very different in style but an important learning curve and enjoyable to make.
I am currently interested in the idea of pace and how a certain space can influence the way we perceive a piece of work -film, video, any moving image, in the form of installation. I am also exploring narrative as the foundation of filmmaking. I would like to develop these two interests into a deeper, synthesized concept which will not necessarily end up as one short films but a series of time based moving images.