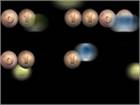 Who are you?
On the Animations for Nanolife we have worked as a team,
A.Schreuders and S.Phoelich. We both studied graphic design before met each other on the Willem de Kooning Academie of Art in Rotterdam. Together we created the Nanolife concept for our final examination. Couple of years later, we both work as freelance multimedia designers and are involved with a lot of different commercial projects. From 3d computer graphics to interactive experiences. Sometimes we still work on projects together.


Why filmmaking?
First of we’re not filmmakers but both multimedia designers. As a designer you work in many dimensions, motion and time are one of strongest to express emotions and feelings. It’s also one of the most abstract dimensions for a designer to work with, perhaps that’s what fascinates us.


Your work is about...
This animation is about a gameconcept called Nanolife. Because we didn’t have the expertise and possibilities to create the programming, we decided to focus entirely on designing al visual elements of the game. These introductive animations are created to pull players into the gameplay. The Nanolife concept is based on a realtime strategy game that takes the player to the fabulous microscopic world of microbes and bacteria. We had a great time translating al that scientific information of the microscopic worlds into elements for gameplay and visuals.


Financing your movie?
Al what was paid for our production was time. D.Tucker helped us out with filling in the voiceover for the Nanolife introduction animation. A few month´s later, we got together with some friends and we tried to get funding for further development of Nanolife. However the bad economics from that timeperiod made it hard to find an interested party.


New Media; a challenge for film makers?
The most important aspect of new media is interactivity, which still offers lots of undiscovered possibilities. The opportunity for an audience to interact with film, requires a different way of thinking for a film maker. Interactivity is therefore the greatest challenge for filmmakers. As multimedia designers we both use our knowledge of filmmaking and animation to our advantage.


What are the potentials of the new media?
New media is perhaps becoming overhyped, but certainly not overrated. The possibilities that interactivity offer are simply underused and not always understood. In the next 10 years interactive applications will change lives for not only filmmakers, but also for communications, marketing and everyone’s daily life. We are just standing at the beginning of a new age.


Do your films have style, just as some painters have?
Our interested in graphics and art inspired us to become designers. We choose not to use one certain style, we adapt styles to what is needed for reaching our target audiences. But for the project Nanolife we created one style of our own, inspired by electron microscopic imagery en world of microbiological beings.


Influences?
Inspiration comes everywhere, not specific one style. Besides that it depense on what genaral mood you are over an certain period. At this moment the Japanese Illustrator Katsushika Hokusai inspires me greatly.


Did you ever had another ambition in life than to become a filmmaker?
The only ambition I had was doing what I like and did best. Concepting and producing graphics for all kinds purposes no matter the technique.


All other remarks
All you need is fun in creating!< overview< Artists interviews