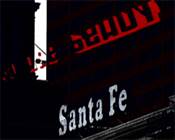 3:00, 2007, Video Art
Bellon’s video work addresses themes of urban space, and its affects on the subject “through mimicking the jarring, repetitive, and fragmented nature of ’postmodern’ society. They combine the harsh reality of the world with the dreamlike reality in our minds, portraying simultaneously the actual and the idealistic.”
-J. Schultz, The Lance, November 2006

This video is part of the Life Is Good™ series that was explored during Jesse’s MFA at York University. The videos themselves explore the nature of contemporary urban space and perception. The everyday urban experience is revealed; where one not only navigates through the physical city, but also through one’s thought processes, after-images, as well as the virtual information all around us. Through the pairing of recognizable imagery with intense color, texture, rhythm, repetition, and pixilation, a tableau emerges where typical spatiotemporal elements are collapsed-boundaries between the conscious and the subconscious fragments and the actual and virtual merge.
Repetition is used to convey repetition in the everyday: mass production, suburban sprawl, architecture, and ‘copycat’ violence....etc. The intense repetition mimics advertising tactics, changing the viewer inwardly; blasé, anxiety, alienation, meditative...are states that are experienced by the viewer. The brightness of the projection also leaves traces of afterimages (closed eye visuals), much like the bright city at night.
Exhibited as large-scale projection, these works trap the viewer in a super-concentrated, media-saturated, urban spectacle extracted from the everyday.

Who is Jesse L Bellon?
An independent video artist and musician from Toronto. Shines in a crowd.


Your film is about?
....my films are about the urban and the personal, the inside and the outside, the literal and the abstract, merged as one...


How did you start with film? And do you have an educational background in art or film?
I have an MFA from York University in Toronto.


Could you explain how you work, what themes or concepts and what is important to you?
I like the contrasts between something large-scale such as the city, but am also interested in the personal or individual. So I try to merge the both and something interesting happens, especially when you screen it in front of an audience.

I see contemporary life as cluttered, convoluted, flat BUT with many layers working in different speeds, locations, colors, sounds.....
I see it as perpetually contradictory and paradoxical......


How did the film come about? Everything (carefully) planned or more intuitive?
The shooting tends to be intuitive, and so is the editing. In my mind I have a set of rules or concepts dictates the overall purpose of my videos.


What possibilities of the web are yet to be explored? Which dangers do you see ahead?
I read that researchers--backed by some governments--want to dismantle the current internet and its infrastructure and make a new internet, in order to address issues of "security" and "censorship" amongst other things. I’m a bit suspicious of that.


Does your work often circle the festival circuits, and do you visit festivals regularly?
I try to screen my work where I can but I have to send it elsewhere because the scene in Toronto is expecting something different.


How influential is the reaction to your film by the audience?
Exhibited as large-scale projection, these works trap the viewer in a super-concentrated, media-saturated, urban spectacle extracted from the everyday.
Blasé, anxiety, alienation, meditative...are states that are experienced by the viewer.


What is your next project about?
You’ll see< overview< Artists interviews