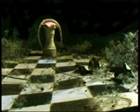 10:00, 2006, Animation
The Tower Trilogy is about hysteria, and it is divided in three parts.
It starts with "La Torre" (The Tower) a 3D animation presenting a claustrophobic space in which some objects rotate on themselves on a chequered floor. This piece is expressing a sense of prison and oppression, from which a first stage of hysteria appears identified with the worms crossing the room.

The theme of hysteria manifests more directly in the struggle of the second section:"Le Formiche" (The Insects), in which a succession of images of shaking hair, falling flowers, black paint on canvas, and frenetic body movements inhabits the screen.

The third part of the trilogy, "Lo Specchio" (The Mirror), revolves around the theme of death in a calm atmosphere again in the same settings of "La Torre" - the room with the chequered floor. Here dead flowers keep falling together with fragments of mirror, and everything ends with the outburst of rain, the sole element that can clean and restore hope to the sense of anguish of the entire film.DirectorBarbara AgresteProducerBarbara AgresteWriterBarbara AgresteCameraBarbara AgresteEditorBarbara AgresteComposerBarbara AgresteCountryItalyEdition2006 BudgetLimited budget< overview

Who is Barbara Agreste?
I was born in Pescara in 1971, and at the age of 14 I enrolled in the Art Lyceum of my home town, although I manifested an inclination to art a lot earlier in my life. After I completed that course, in 1990 I went to Milan to attend a scenography course in the Academy of Arts, but that was a funny period in my life, and I knew that I wouldn’t survive in the cultural atmosphere of the italian university very long. In 1993 I left Italy and went to London where I begun working as a dancer for a dance company called: "Rawhead Dance Theatre". After that experience in which I a taste of how it is to perform in front a lot of people, in 1996 I went back into studying visual arts in Kent Institute of Art & Design choosing “Film & Video Production” as my subject of study. After graduating in July 2000, I went to do an MA course in ’Fine Art’ at Central St. Martins College of Art
& Design in London where I was awarded the ’Master of Arts’ in September 2004.
Since then I continued making films and painting, attending film festivals and art exhibitions in Italy and abroad.


The Tower trilogy is about...
In this work I explore the state of hysteria, but there is more to it than just expressing a concept or a word. There are also bits of my life in this film, or things that I have seen and wanted to restage amplified and full of everything that they were meaning or saying to me. For the first part of the Trilogy I was inspired by a guy friend of mine, I wanted to elaborate and project a version of his imaginary experience and attitude to life, that sense of emergency that I saw in his behaviour, and the danger he was going towards to. So the first piece starts with the loss of control, the turning in speed of heads that do not know anymore what is happening to them, and then after looking outside, into my friend’s life and into what closely surrounded me, with the second piece, I returned thinking about the self, staging my struggle and fight against an unknown obstacle. That hysteric crisis is also a loss of control where anything could happen to me, and everything already happens, starting with the impossibility of containing my body that rebels against an undefined form oppression. My journey concludes with a form of mourning in the third piece, the falling of objects and the rain are those elements with which the pain goes away, is expelled. If this is anyhow linked to my life, if I ever needed to mourn for someone, I expressed it in this film.


Why filmmaking?
I started to be interested in experimenting with moving images since when I begun taking dancing classes and felt the need to express myself with my own body. I realised that art had very much to do performance, sound, and music, and somehow I could not separate myself from music and movement in general, therefore I though that film, by incorporating performance, images, sound, and all these different forms of expression in one, was a more complete medium that I could use to develop what I wanted to represent.


What kind of films do you make?
My films are experimental, I work very much with animation, mixing two dimensional successions of drawings with three-dimensional settings animated using the "stop motion" technique, and real life shots. I like crossing over layers of different bits of film that I made with these different techniques. Everything is very abstract, there is no narrative other than in the succession of images and places that appear one after the other with their elements moving in the frame. Very often though, I include figurative elements to these scenes that create a surreal atmosphere.


Is film a big part of your life?
Film is a consistent part of my life, but I am also a painter, and I alternate expressing myself with these two mediums, because if I only used film, I would only employ my eyes in the process of art-making, and I’d be looking at a pc screen all the time with no other sensical experience. It is useful for me to stop for some time working with the camera, and start dealing with materials like paper, water, glue and canvas; this is as a way of connecting myself and my body (through the tactile experience) to the earth from which I draw inspiration.


Financing your movie?
My movie is completely self financed, the only thing I paid for was the DV camera with which I shot it, I asked a friend to perform in a small clip at the beginning of the piece, but I did not pay him, he just palyed for fun, and I did the rest of the performance myself, so I was very much working on my own in this movie.


New Media; a challenge for film makers?
I think that the internet is a revolutionary tool for communicating, creative people can easily reach other parts of the world and be able to show their work to audiences that otherwise would never see it.


Individual film making or co-operation?
I have difficulty working in a team, I have my own ideas concerning what to represent with film, and I find that especially performers do not understand the camera work, and how important it is.
For me it’s not enough just to shoot a performance, without caring for the lighting and the composition, therefore I prefer working as much as possible by myself, because this way it’s easier to decide where things should go, what to put in the frame, and how.


Future...
I dream of having more time to develop my ideas, I would like to make more animations and video work to show, not only at festivals, but also in Museums and galleries.
I would like to exhibit in more places and have my work rewieved by more people, in short to me it’s important to just keep doing what I do, and to be able to do my job in the best possible conditions. Possibly a dream that I have is to be financed to prod


Did you ever had another ambition in life than to become a filmmaker?
Yes, once I wanted to be a dancer.


Digital or classic?
The best thing is to shoot 35 mm film, I like the look of film and the way things move at 24 Progressive mode: that dreamy look that it is so difficult to acheive with most video cameras, as they interlace the footage. However, the digital technology is becoming sophisticated, and more and more DV cameras have the ability to imitate the look of film. I recently bought a DV camera which shoots progressive video frames, and it has also a slow shutter speed that makes things move slowly; so for now this is the tool that I use for shooting my clips.


Which one is more important to you, the camera or editing?
Definitely the camera work.


All other remarks
I hope this festival will be a great chance to know other artists and to enjoy video-art in general. < overview< Artists interviews