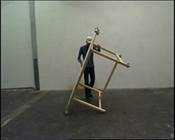 10:33, 2006, Video Art
Documentary film of a performance. A meaningless action, moving a table on wheels all over the room.
DirectorStijn Van DorpeCameraFabien DelathauwerEditorStijn Van DorpeCountryBelgiumEdition2007 < overview

Who is Stijn Van Dorpe?
I am a visual artist living in Ghent Belgium.


Your film is about?
This film is my contribution to brainbox, an experimental project of artists working together, interacting, intervening in a work in progress. The table -a place for discussion, where people come together- is used as an object. Manipulating the table in different positions, transforms it into a sculpture.


Do you have an educational background in art or film? Could you explain how you work, what themes or concepts and what is important to you?
I studied Painting and Mixed Media. With this background I consequently develop my own oeuvre. The elements of my current work span the public, social and philosophical space. The world as a reservoir of millions of elements that can be brought into action, that can be played with, that can be interrogated. Esthetical, philosophical and sociological references are possible. I see an artwork as an open structure from which the spectator can generate different meanings according to his position, his background knowledge.

Film is an appropriate medium to achieve this objective.


Does your work often circle the festival circuits, and do you visit festivals regularly?
I had different exhibitions in art galleries. This was the first time I participated in a film-festival.< overview< Artists interviews