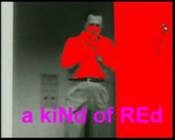 8:36, 2007, Experimental
H-10 a visual essay tribute to the group known as the Hollywood Ten: professionals of the cinematographic industry that, in 1947, refused to testify before the House Committee on Un-American Activities. The video-cut goes through the themes of freedom of choice and the pros and cons of the politics in cinema. Ten men; ten years; one red C (circle, channel, cinema).

During 10 years it was denied to them the possibility to create freely and even to sign there work. These year we celebrate the 50th anniversary of the decline of the blacklist politic that listed 151 entertainment industry professionals (also known as the "red channels blacklist").

Who is Alberto Damas Guerreiro?
Well, we may say I am a experimentalist! Yes, this is how I can define myself considering my visual work. Of course professionally I’ve been working in the museums area and anthropology research. I have an academic background in anthropology and museology. I’m just starting a new adventure in visual art.


Your film is about?
H-10 is a visual essay tribute to the group known as the Hollywood Ten. They were professionals of the cinematographic industry that in 1947 refused to testify before the House Committee on Un-American Activities. The work goes through the themes of freedom of choice and the pros and cons of the politics in cinema. I follow some key-directions: ten men; ten years; one red C (circle, channel, cinema). I wanted to make tribute to those men that during 10 years were denied the possibility to create freely and even to sign there work. In 2007 we celebrated the 50th anniversary of the decline of the blacklist politic that listed 151 entertainment industry professionals (also known as the "red channels blacklist"). I think that is important to remember this courageous act because we still live under the menace of this kind of censorship taken by whom who have the powers to control the media. In many ways this is still a very up to date subject.


How did you start with film? And do you have an educational background in art or film?
I started by my own. Freely. I have no art school background and I am not a professional video artist. But this is not an hobbie also. I take it very seriously and my methods and investment are near to them used by students or independent professional. Of course I established some contacts at the school and professional level but this is not my main objective. My main objective is to experiment new ways of comunication of some of my philosophical, political, humanistic ideas and views.


Could you explain how you work, what themes or concepts and what is important to you?
The videos express some of my experiences involving the visual re-treatment of moving images. I call it video-cut process. Its a process near to the found footage re-cut used on film. The main difference here is that beside of using film footage I use video frames that I re-cut and edit to give it a brand new sense. Its also very important in my projects the use of sound experience and original music that I work with the support of the musician and sound engineer António Bragança. I consider my video-cut movies a long-term work in progress project regarding a global vision of Mankind. What I really want is to show a new approach to the interpretation of human values and historical development.


How does content relate to the form of your film?
The content is always - until this moment - the basis of my work. I started always by a subject. A conceptual subject. In this case you may call my work a conceptual one. I try not to be too much formalist but I am no doubt a conceptualist on a experimental level. There is always a concept that gives the content to the form of the movie. I always prefer to call it making video-cuts because making movies its a different thing: in that case the process takes place on a filming basis.


How did the film come about? Everything (carefully) planned or more intuitive?
I am very intuitive. I started with a main idea. In most cases, its a political one: human freedom, human rights, social and technological oppression, revolution, warfare, youth, etc. Then I began to make some research and collect video images regarding the subject I want to developed. In some cases I can mix it with some of my own video filmed images. Then I work on a aesthetic level and establish an art or visual pattern to all movie project. The main task is to re-cut and re-edit the material and mix it with the soundtrack. Its here that the collaboration with Antonio Bragança takes place in the way to get the right tune to the right mouvement.


New Media; a challenge for film makers?
Undoubtedly! New media is great hope for the film makers and all kind of art workers! Give us more democratization on the access to means of production and promotion and also new possibilities on a more economical level. New media means new grounds of achievement. The streaming festival is a great example what new media can offer to film makers: an entire video festival rolled only in the internet! Amazing stuff!


How does the internet influence contemporary art in general according to you?
I think that is starting to have a great influence. Most of all on young or student artist and of course on the outsiders like myself that are developing art projects. There are many projects that only can been seen or known by the web. Give us all great possibilities of inter-connection and inter-relation among artists, art lovers and art commissioners. My work mostly happens in the internet: its where everybody can see it (by the screening on video-art specialized sites) and its where I make the promotion of it. I really think that in what media is concerned internet its the future!


What possibilities of the web are yet to be explored? Which dangers do you see ahead?
The web represents an infinitive universe. I am sure that are still many more to explore. The great dangers are always problems related to the free use of resources and the protection of the commercial use of the original materials but this dangers concerns more the great corporations, commissioners and companies and less the independent or solo-artists. But even some of the great artist of the world are making there way on the internet because they realize that the web increases there opportunities and freedom to act. Take a look what is happening in the music industry! Musicians are getting free from the big labels through internet (radiohead is a great example of that). I have a great conviction that in the next decade the Internet will take the place that TV have today. So, no way we will fight it to win. Its better to understand the real proposions of the web and work with and into it.


YouTube? Why or why not?
No, never. You tube its a great spot but you will never see one of my works upload by me on you tube. I prefer to upload my work in specialized sites because give us a more efficient link to the ones that are really interested in your video work (other artists, art lovers or art commissioners). In you tube the spectrum is too large and less specialized. The other advantage of the specialized sites like videoart.net or perpetual art machine (just to mention the ones I participate) is also the quality standard of the screening. Of course, I don’t have nothing against the you tube (I consider a good thing) but I just don’t consider a great advantage considering that you have specialized web spots on video art.


Does your work often circle the festival circuits, and do you visit festivals regularly?
Slowly is tracking is own way by the video art festival circuit. I am not a regular festival consumer but my work try to be present in the events I consider that the concept links to the objectives of my work.


Do you often meet and discuss with other film makers through the internet?
Its not one of my habits to meet or discuss with other film makers but I give many attention what others video artist do. I try to follow whats going on in the video-art world and one of the good things of the participation on events and take part on projects like video-art sites is to be in touch with what other movie makers are doing. That I consider very important to exchange experience and lurn more with others.


How influential is the reaction to your film by the audience?
I don’t consider very influencial. Now, three of my works are participating in a festival in Australia: I’m not there and I don’t even know how the people will react? The important is that it will be there for those who want to see it. Of course I want the audience to understand and get the message behind the work but this we never really know? Do we?


What is your next project about?
I intend to continue to work on my video-cut process projects. More movies regarding new subjects. In the same time I want to edit my own filmed material and make new movies with that. I have one or two ideas based in some material I filmed along the last year. Maybe I will do something linked to the experimental documentary and experimental fiction. Finally, I have a big project that I would love to accomplish this year: a western short fiction involving a music performance on stage or live-act. I call it an electric-western because is related to a futuristic aesthetic and contemporary electronic music. Its a very ambitious projects that I want to extend to some friends of others art areas. Making that would be great! Don’t you think?
< overview< Artists interviews