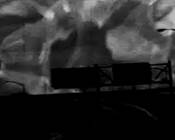 Fabio Scacchioli - Nightlife in a puddle

8:00, 2010, Experimental
This is an [[hallucination]] after the storm. In [[super 8]], dark, lightning and disappearing scratched roads.
Discovering that a village festivity is also possible in a puddle at night is both terrible and sublime.
Are the images that drown and disappear in [[memory]], or are we drowning, while the images observe us from an unreachable [[time]]?

Who is Fabio Scacchioli?
I am a filmmaker, who also works with installations and inusual ways of screening.


Your film is about?
It is about hallucinations. There are memories filmed by other people that meets my dreams and nightmares underwater.


How did you start with film? And do you have an educational background in art or film?
For me the film is an extension of imagination and thought. Since I started to think, I think in a filmic way.


Could you explain how you work, what themes or concepts you use and what is important to you?
For me is very important to bring the film flow to the flow of thought. When you can do this, you can act like in a trance, without thinking (as when one speaks his native language). Otherwise, the language and its structures prevail, it creates a distance, and everything becomes colder, less spontaneous, too constructed.
In general, for me are very important the connections between memory, perception and thought.


How do you finance your projects (by yourself, sponsors or subsidy)?
By myself, and when I’m lucky with grants or similars.


How would you describe contemporary videoart?
I don’t like the word "videoart". I think exist the moving pictures, and that each form of moving picture (cinema, videoart, web, etc.) has your features, but all have in common the illusion. This is amazing, and very complex.


Did the web changed your view on art, or your career?
No. The web is a beautiful tool, but give more importance to the instrument than the rest, I think it’s a mistake.
My career doesn’t exist: I’m out of the market and the art circuit. This makes my life more difficult, because I have to do other works in addition to the filmmaker. However, I think it is a choice in favor of respect for the art, and intellectual freedom.


Where would you place your work; cinema or art. And what is the difference between those according to you?
I dont’ like distinctions or categories. There is a work, there is something in this work (or not!), I dont’ know if this is called art or cinema, but I prefer not to know. I prefer to feel this "something" without a name. The only category that I agree talking about art, is the mystery that hides in it, and the attraction to this mystery.


What is your next project about?
I’m finishing a visual project based on the concept of hauntography.
I’d like my next project was a feature film in super 8. But this requires a minimum budget (that I haven’t). I have to find it!
< overview< Artists interviews