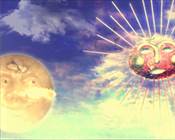 2:51, 2009, Music video
A music video for composer/vocalist Fiona Soe Paing using found objects and drawings by Harriet Hannah-Wickes (aged 5). The song is taken from the album "No Man"s Land" and is sung in an invented "No Man"s Language" . The original font and alphabet were designed by Daniel Burman.

The Sun and Moon fall hopelessly in love, but they can never meet. Not, that is, until the intervention of the clever bunny... but that may not be the end of the story - it might be the end of the world.
DirectorZennor AlexanderCountryUnited KingdomEdition2009 < overview


Your film is about?
THE SUN AND MOON FALL HOPELESSLY IN LOVE BUT CAN NEVER MEET... UNTIL THE CUNNING EASTER BUNNY HAS A PLAN ... BUT PLANS DON’T ALWAYS WORK OUT AS INTENDED... COULD THIS BE THE END OF THE WORLD? THE VIDEO IS FROM THE AUDIO-VISUAL ALBUM ’NO MAN’S LAND’... WITH ’LYRICS’ SUNG IN AN INVENTED ’NO MAN’S LANGUAGE’

This video was made from animating random ’found’ objects - weaving a story around the objects, altering the narrative as necessary several times along the way until the story clicked.


How did you start with film? And do you have an educational background in art or film?
Zennor has no formal film or art school training, and is a self-taught animation artist. Before starting to work with animation techniques, he was a composer of music for television, then switching roles to create visuals for music.


Could you explain how you work, what themes or concepts and what is important to you?
We work in a very slow process of evolving ideas, playing with images, trial and error until something "Clicks" - starting with no pre-conceived ideas of a preferred outcome. We try to follow where the work wants us to go, if necessary making many new starts, throwing out all the material and starting over! This is a very slow process, but usually results in a more interesting creative adventure. Common themes are creation and creativity, cyclical structures, evolutionary forms.


Where do you get your ideas or influences from?
From laughing and talking, from coincidences, from things that make us sparkle - lost identities and found objects - creating meaning from random events.


How does the title relate to the work, and how do you find a fitting title?
The title ’THAYN TYHA HAI is a random, meaningless phrase, from the invented language from the audio visuals album "No Man’s Land" - an invented "no man’s language"


How important is sound in film, and if you use sounds, do you create your own or use existing?
Sound is the starting point for our visuals - music is composed first, then the visuals created in response to the music.


How do you finance your projects (by yourself, sponsors or subsidy)?
Self funded


What is your next project about?
Using another song from the No Man’s Land - we dont knwo what its about intil we finish it!