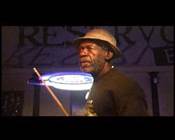 Diran Lyons - Will and wallace

7:56, 2006, Experimental
Diran Lyons’ short film "Will and Wallace" is both a poetic and anthropological investigation into the tension, pleasure, and linguistic interrogation of an opponent that often accompanies competitive behavior. The film centers on the playful harassment of two individuals - Wallace Franklin and William Patrick Shaffer - who are engaged in a game of pool. The film highlights their ludic use of aggressive and violent phrases/terms.

Except for the closing sequence which incorporates real-time audio for the first time, the film’s overall silence strips these aggressive utterances of their audible context, making a viewer concentrate on the narrative visually, read lips, and search for the subliminal circles which are inscribed just for an instant around the mouths of the players. These isolate the uses of metonymic expression, drawing our attention to words, phrases, and sentences whose content is in total discord with their literal meaning.DirectorDiran LyonsCrewWilliam Patrick Shaffer, Wallace Franklin, Diran Lyons, and various extras at Reservoir Bar in Ybor City [Tampa] FL.Edition2007 < overview

Who is Diran Lyons?Heavily conceptual with exacting craft and edgy content, Diran Lyons’ art practice employs disparate strategies and media according to the dynamics of a particular project. Lyons was a Regents Fellow at the University of California, Santa Barbara, securing a Master of Fine Art in Painting and New Genres. Committed to the tradition of artists such as Joseph Kosuth, Robert Smithson, Barnett Newman, Charles Gaines, Renée Green, etc., he embraces the written word as a critical part of his artistic practice, publishing texts and making paper presentations about philosophical issues, his own artwork, and that of others.

Your film is about?"Will and Wallace" is both a poetic and anthropological investigation into the tension, pleasure, and linguistic interrogation of an opponent that often accompanies competitive behavior. The film centers on the playful harassment of two individuals - Wallace Franklin and William Patrick Shaffer - who are engaged in a game of pool. The film highlights their ludic use of aggressive and violent phrases/terms.

Except for the closing sequence which incorporates real-time audio for the first time, the film’s overall silence strips these aggressive utterances of their audible context, making a viewer concentrate on the narrative visually, read lips, and search for the subliminal circles which are inscribed just for an instant around the mouths of the players. These isolate the uses of metonymic expression, drawing our attention to words, phrases, and sentences whose content is in total discord with their literal meaning.

How did you start with film? And do you have an educational background in art or film?My background is in art. Originally I was a painter who branched out into installation and then video installation. As things progressed into a desire for a more rapid relaying of ideas, film and video seemed a logical extension of the two-dimensional image making I was doing in the late 90s. I owe a considerable debt to my mentors at UC Santa Barbara, most notably Colin Gardner, who is Professor of Critical Theory and an enormous wealth of knowledge concerning the history of film and film making. He rooted my interest in Deleuzean film theory, one that attempts to investigate particular issues of representation, falsehood, and time in the cinematic image.

Could you explain how you work, what themes or concepts and what is important to you?I don"t necessarily have a common theme when I set out to work. Well, perhaps that is not true. I work in a variety of different media, and ideally I try to give myself a lot of latitude when it comes to subjects as well, such that I might work to attain one set of goals at a specific time that might have literally nothing in common with other previous projects or future ones.

Through the years, however, I"ve been rather preoccupied with Friedrich Nietzsche"s idea that artwork intrinsically lies to the viewer, that the artist participates in a form of "Creative Lying" and that this can be pushed to lesser or greater extremes for specific conceptual purposes. There really is not enough space to try to flesh out the details here, but a working definition of this type of process is that it involves the use of deception initially to help a viewer deduce a greater truth that lies behind such deception. A well-read audience generally can quickly identify that a strategy employing illusion is in place, and it then becomes their task to decipher the particular codes within the work and the new meanings these generate.

A recent filmic example of this in my work is a short I produced under the title "George W Bush Battles Jesus Christ." The video reconfigures content obtained from the news media and Franco Zeffirelli"s "Jesus Of Nazareth" [1977]. The Bush supporter will protest that the clips are taken out of context and therefore border on propaganda, but the intention of the recontextualization is that the parts form a new whole that ultimately present a viewer with a truth proposition. In this case, therefore, what I am doing is, as Nietzsche would attest, of a far different order than straightforward propaganda which generally works in the reverse order, whereby the ending result is not a truth proposition but a lie that the author hopes a viewer will perceive as true.

How did "Will And Wallace" come about? Everything (carefully) planned, or was it more intuitive?"Will And Wallace" was an incredibly impromptu process initially that turned rather tedious later on in the editing stage. Basically, I randomly bumped into the two pool players in the video, William Patrick Shaffer and Wallace Franklin, on 7th Ave in Ybor City [Tampa] FL one evening, and arranged for them to square off in a game of pool. I grabbed my camera and other equipment and came into shooting the event with no intentions one way or another.

It became more and more apparent as the game went on that a significant amount of trash talking was taking place, and it certainly wasn"t ever going to let up until someone was victorious. The words used were rather violent if taken in a literal sense, but in the context of the friendship between the two players such violent words were actually putting forth endearing and friendly forms of expression and meaning. The rupture between signifier and signified was ever the more pronounced, and I really enjoyed highlighting that linguistic effect in the video.

How do you finance your projects (by yourself, sponsors or subsidy)?Generally by myself, yes. It would be nice to take in some subsidies, as long as the content is not compromised as a result. Easier said than done...

YouTube? Why or why not?Absolutely. Most specifically because it speeds up the process of the idea marketplace, particularly where politics is concerned.

It further allows artists the opportunity to send work to festivals and curators instantaneously, rather than burning and mailing disks which take up space and require postage costs, etc. The image quality has a ways to go, no question, but the immediacy involved is crucial and so convenient.

It"s certainly interesting to participate in something like the Streaming Fest because there is little, if any, face to face contact with other film makers or producers.

Do you often meet and discuss with other film makers through the internet?Whenever possible!

How influential is the reaction to your film by the audience?On me it used to be a lot more influential in years past. Now I have sort of embraced the idea that many will appreciate what I am doing, and various others will not. I generally don"t get too many apathetic sort of responses. I enjoy listening to criticism a lot more as time goes on. It is a weird sort of space, the space where criticism is offered and discussion between artist and audience unfolds. One can"t always be sure how to react, with an attuned ear that absorbs feedback, as one who will rigorously debate and contest certain propositions from the audience, or some form of hybrid between the two extremes?

What is your next project about?In terms of film related projects, the next thing I am working on is a collaborative feature length film entitled "Goodbye Victoria." I co-directed it with Matthew Potter, a friend I"ve known and worked with for over a decade. William Patrick Shaffer is the main character, and working with him previously on "Will and Wallace" really made "Goodbye Victoria" possible. We developed a chemistry that segued quite well into the feature film.

There are some "Goodbye Victoria" teasers and other miscellaneous Political Remix Video clips on our LYONSPOTTER YouTube page. We"re hoping the post-production will be complete in July 2008. We look forward to screening it right here soon thereafter!