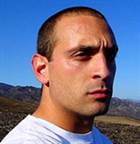 16:37, 2006, Video Art
CALIFORNIA:EXCURSIONS explores the relationships between synthetic materials and the natural landscape, focusing on how everyday objects and materials can interact with their surroundings to create tension, pleasure, suspense, and an altered space.
DirectorDiran Lyons | Jesse WilsonCountryUSAEdition2006 < overview

Who are Diran Lyons and Jesse Wilson
Diran Lyons - and his collaborator in the CALIFORNIA:EXCURSIONS project, Jesse Wilson - utilize film to document their sculptural and performative interactions with diverse landscapes. Founding the art collective ’WHAT.IF?SOCIETY’ in 2004 while studying New Media in the Master of Fine Arts program at the University of California, Santa Barbara, Lyons and Wilson make public events with large inflatable objects, ludic performance, and audience participation the direct subject of the film. The resulting picture explores the relationships between synthetic materials and the natural Californian landscape, focusing on how everyday objects and materials can interact with their surroundings to create tension, pleasure, suspense, and an altered space. Lyons and Wilson currently live and work on the east coast, in Florida and New York respectively, collaborating on forthcoming films that will involve similar themes.


Why filmmaking?
What inspired us to create CALIFORNIA :EXCURSIONS was a combination of a desire to document in some way our performances with synthetic objects as well as making a separate new work with the footage. So the performances live on in some sense, but are transformed ultimately through montage, jump cuts, the conversion of the initial imagery to black and white, slow motion, etc.


CALIFORNIA:EXCURSIONS is about...
The film really deals with – in one sense – the desire to be playful, to engage a serious form of playfulness, and the desire to set challenges for oneself that cannot be actualized, but yet still give a form of pleasure in the process of discovering the threshold of that impossibility. There is a certain enjoyment an individual gets in determining how far one can do something before such an activity fails absolutely. We took the balloons in one sequence to the Santa Ynez mountains which had been recently vanquished by fire. The aftermath of the fire left the terrain barren and covered in soot, with its indigenous Manzanita bushes remaining only as sharp spikes emerging from the ground. The balloon inflated there – punctured over and over again into the sharp rocks and bushes’ remains by the force of the wind – was doomed to pop before reaching the top of the mountain, but we entertained the idea of pulling it upward and attempting to reach the top anyway. The film is about struggle in some ways, determination, focus, heart.


Financing your movie?
The film received no corporate subsidies or sponsorship of any kind, and we wanted it to retain that feeling of be produced with a minimal budget. The materials or props, again, are of the everyday: inflated sealed plastic tarp being the catalyst for balloon wrestling against the winds of San Francisco, Santa Barbara, the Satna Ynez mountains, etc. The primary participants were Diran Lyons and Jesse Wilson, and several friends of the two.


New Media; a challenge for filmmakers?
We are not quite sure if new media is overrated, per se, as it seems in today’s artistic context that anything can be a viable form of communication. The potentials of new media, however, have barely started to be utilized, and these sorts of technological resources are always changing and increasing in their potential manifestations. Our intention is not so much to tautologically investigate new media, but rather to use the technological and conceptual apparatus of digital cinematography as a way to relay to viewers the types of performances we find interesting or possible in such a vast and diverse natural landscape like Californians are accustomed to. The Internet becomes - and already is of course - a logical venue for such.


Does your film have style, just as some painters have?
CALIFORNIA :EXCURSIONS is really rooted in a quick shot, jump-cut, fragmented sort of sensibility. We try to present an above-the-action point of view as well as maintain a perspective for the viewer at eye level, reverberating between the two at times, or simply offering several perspectives of isolated events. The images are brief and at times poetic, but after a while the work - while in the editing process - just started to develop its own sort of language and logic, not particularly being derivative of any one filmmaker or manner of filmmaking.


Influences?
Probably Charles and Rae Eames could stand as the most influential on our thinking in the sense that much of their work contemplates the everyday and the complexities therein, but Gilles Deleuze would take a close second, if for nothing else than the meditation and privileging of fragmentation. We don’t necessarily wish to show everything or even try to, but rather to give an impression, a slice, a memory, a form of truth, but not "the" truth. This is all more playful than that.


Individual film making or co-operation?
In teams, no less! There is all too much fun to be had through relationship with other people. In that sense it is about community, relationship, arguments, compromise, critical response from others, building a story together. Allowing things to develop a bit more organically and complexly. Individualism is really sort of stuffy in a certain sense, and shared labor is always a plus when hundreds of editing hours are upon you. While Diran Lyons enjoys performance, he prefers editing, and of Jesse Wilson the reverse is true.


Your plans and dreams...
Producing a feature length film, or a few, would be something of a goal for the future. Currently, however, making shorts are occupying our attention, and most likely these will involve similar subject matter.


Did you ever have another ambition in life other than to become a filmmaker?
We both have differing and various ambitions, but if there is a central or common interest it is in the making of tangible objects and performance. However, as stated previously, filmmaking becomes a strong way of documenting these endeavours and activities.


Digital or classic?
Digital video certainly makes the process more affordable and fluid, and so at the current moment it seems to figure into most motion picture plans of ours. However, we still have a great deal of respect for the more traditional format and approach, and of course we will entertain exploring the traditional form in the future if the proper circumstances present themselves.


View other work of Diran Lyons
There is not any one site devoted to our filmmaking, but Diran Lyons maintains a regular weblog with upcoming events or thoughts on art, philosophical issues, etc. It can be visited at http://lyonspotter.blogspot.com< overview< Artists interviews