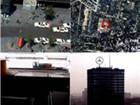 4:00, 2006, Video Art
Vier berliner blicke (four berliner views) is a video suite of four 1 minute long works. Each video is a sequence of still images of Berlin from three webcams and a satellitar map, downloaded from the web and processed in Italy.

Who is Rick Niebe?I"m Graduated in semiotic of cinema at Pisa University, I"m a visual artist. In last years I dedicated more on videomaking.

Why filmmaking?I"m interested in images and representation. I guess it"s a sort of disease...it affects everybody with different symptoms. Maybe filmmaking is just one of them, maybe it"s a remedial...

Financing your movie?I"ve made no budget movies just because I can"t finance them, however I do believe in "low-budget" and "low-tech" production.

New Media; a challenge for film makers?I"m looking for a critical re-use (or mis-use) of rough materials from the "mediascape". I think i"ts a good strategy to live with new technologies. A very interesting game with the flood of images in which we live.

Do your films have style, just as some painters have?I could describe my artistic research of videomaker as a minimal and epigrammatic experimentation with ordinary images.

Did you ever had another ambition in life than to become a filmmaker?Yes: to be a painter. You can find here a work of animation. Others are not on line..

All other remarks"Pop artists deals with the lowly trivia of possessions and equipment that the present generation is lugging along with it on its safari into the future" (J.G. Ballard) < overview