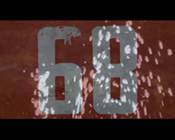 3:05, 2009, Experimental
Produced as part of undercovered festival, cesta, czech republic and dedicated to czech artists vĕra chytilová and eva švankmajerová - this work celebrates resistances of 1968 (prague spring), charter 77 and the velvet revolution of 1989. produced to celebrate 20th anniversary of the fall of the iron curtain while reminding we are still not free
DirectorSean BurnProducerSean BurnWriterSean BurnCameraSean BurnEditorSean BurnCountryUnited KingdomEdition2010 ScreeningsManchester metropolitan university 7/1/10< overview

Who is Sean Burn?
Sean burn is a writer, performer and outsider artist with a growing international reputation. He is also actively involved nationally in disability arts. He was shortlisted for a dadafest disability arts award 2009 and is currently outside in artist in residence to the new gallery walsall in association with dash (disability arts shropshire) where he is reclaiming the languages of lunacy. Http://www.thenewartgallerywalsall.org.uk/whats-on/event/dash. This is one of three residencies seeking to place disability arts in the mainstream. His plays are performed by breaking binary; ctc; first draft; free-thinking festival (radio three); gobscure; half moon; maverick; pegasus; paines plough; queens hall arts; under construction; weaver-hughes ensemble; zeitgeist. His thirty poetry films have received many screenings worldwide, as well as at tate modern and national film theatre studios, london. Exhibitions / installations / performances have been presented and toured with arcadea; cesta, czech republic; dada-south; dash; the door (birmingham rep); fotofeis and grampian hospital arts trust; fold and fred; gulbenkian canterbury and lit up; humber mouth festival; interarte, germany; lancaster university and lancaster litfest; new word order; odins glow; ovada; platform 00000008; shout festival; stanley picker gallery and the live art development agency. He has had three cd’s of his work released, most recently speaksong (with gareth mitchell, musician). Skrev press (http://www.skrevpress.com) published a third full-length collection of his writing – wings are giving out – (isbn 978-1-904646-56-3) in 2009. Work can be found at http://vimeo.com/user2623542 (film), http://www.audiotheque.co.uk (drama / spoken word), http://audioboo.fm/seanburn (soundworks and shorter spoken word) and http://www.flickr.com/photos/burnsean (photos).


Your film is about?
(produced as part of undercovered festival, cesta, czech republic and dedicated to czech artists vĕra chytilová and eva švankmajerová) - this work celebrates resistances of 1968 (Prague spring), charter 77 and the velvet revolution of 1989. Produced to celebrate 20th anniversary of the fall of the iron curtain while reminding we are still not free.


How did you start with film? And do you have an educational background in art or film?
I’m an outsider artist, entirely self taught in all aspects of visual art (not just film), have learnt by playing and experimenting, helped occasionally along the way by critical yet supportive friends.


Could you explain how you work, what themes or concepts you use and what is important to you?
Artistically i like layers, many many layers, working intuitively, putting things together seeing what works / what doesn’t. Concepts - injustices in the world, illnesses, and finding moments of poetry despite it all.


How long do you usually work on one project?
As long as it takes. I’m a slow worker. Often i will approach something with bursts of energy then sit back and leave it for a while before returning to it again.


Do you carefully plan the production process or do you work more intuitive?
I work intuitively rather than plan anything


How does the title relate to the work, and how do you find a fitting title?
They fall into a title or the title falls into them.


How important is sound in film, and if you use sounds, do you create your own or use existing?
Crucial - i always wanted to be a musician. Worked with words instead. Found visuals too. Now i’m adding sounds - my own. I also love working with musicians (especially improvising ones) but my film soundscapes are all my own.


Did the web changed your view on art, or your career?
No, but it is a great tool to have available.


Where would you place your work; cinema or art. And what is the difference between those according to you?
Cinemart / artinema / cinmart.


How important is the reaction to your film by the audience?
Audiences plural - different peoples from across cultures, genders, sexualities, classes, dis/abilities etc - but rubbing along together and responding to film (and other arts) - very


What is your next project about?
A lot of different projects - some about disability, others about language, one about the amazing singer sainkoh namchylak.