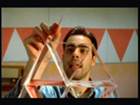 Who is Jasper Scheepbouwer?
38 years, live in Amsterdam and work as an animator, visual effects freelancer and director. I studied at the Gerrit Rietveld (Art-)Academy, but that was painting and graphics.
Basically, everything I do now I have taught myself through practice.


Your work is about...
Most works which are made outside the job area are ment as experiments. Just to try out and find how something works, explore new techniques and those sort of things.
To make sure these experiments won’t get boring and dull, I always combine it with a concept that holds my insterest, where I can focus on as many as possible fronts to express ideas.


Why filmmaking?
It offers me to do the things I enjoy. Things I can, or where I have certain ideas about. Drawing, animation, writing, photography, sounds and suchlike things.


What kind of films do you make?
Fiction?


Is film a big part of your life?
Yeah, it’s my work, I am voluntarily dedicated.


Financing your movie?
All the films shown on the festival are made without subsidy. Didn’t even applied for subsidy neither. Cast and crew were volunteers and all was paid out of my own pocket.


New Media; a challenge for film makers?
It’s hard to comprehend how everything in the media field will be influenced by the internet. Till recently the internet was mainly aimed at text because t.v. Quality moving images used tremendous lot of bandwidth. Now however, it’s coming closer to a standard. So, everything that’s already widespread standard, like email, chat, forums and blogs will probably happen to audio and visuals aswell.
Next to that, I use the internet a lot for work, research, software updates, study and for communication with customers.


Which film related websites do you frequent?
Mainly related to the graphical software I use for my work. CGnetwork, Flay, Spinquad, Newtekforums, animation world network to name a few.


Individual film making or co-operation?
It’s great to work in a team when possible, though some things are not practical to do with others.


Did you ever had another ambition in life than to become a filmmaker?
Sure, a cartoonist. Drawing Donald Duck cartoons for example.


Digital or classic?
The technic doesn’t matter, expect for software.


Which one is more important to you, the camera or editing?
I can’t separate those.