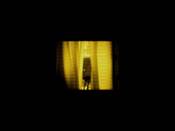 3:35, 2008, Video Art
It is already time to go back to the small room rented in a Madrilean suburb where the presence of different languages and cultures reminds us about the experience of being foreigners. Latin American women workers migrating to different countries in the Western World, to find better jobs and earn better incomes in order to be able to sustain themselves and their families in their countries. Most of them are maidens and mothers. In the new environment Latin American women immigrants are alone. They face solitude and isolation in the name of a better standard of living for their families, better education for their children, and better medical assistance for their elders.
DirectorGuadalupe Arango-ramosProducerGuadalupe Arango-ramosWriterGuadalupe Arango-ramosCameraGuadalupe Arango-ramosEditorGuadalupe Arango-ramosComposerGuadalupe Arango-ramosCountryPeruEdition2010 Screenings2010
Bang Festival third edition. Video: Curling me up! Barcelona, Spain.
ARTERIA. Contemporary Art. Vídeo: Kalanca. Huesca, Spain
2009
BAC FESTIVAL. Pandora´s Box. Ob- Art Gallery. Barcelona, Spain.
“Mass- media Women - Mujeres mediáticas”. Vídeo: Working Papers.
2009
Loop Festival. OFF- LOOP SECTION. LA VALENTINA. BARCELONA, Spain
A gaze to the South (Una Mirada al Sur). One of the Six Peruvian video artists selected for this edition. Videos: Soleá and Curling me up!
2009
International Performance ´s Congress. Cita a ciegas (Blind date) Cusco, Peru.
Video art performances (Call me later, Curling me up, Teaching you, Thinking about you). Curators: Emilio Santisteban and Fernando Oballe.
2008
Bang Festival second edition. Vídeo: Miraflores. Barcelona, Spain.
Visionaria Festival. Video: The little box. La Toscana, Italy.
Awards2007
TEMPTATIONS 2007. Prize.International Print and Contemporary Art Editions Fair ESTAMPA.Madrid, Spain

I am multidisciplinary artist, who, since 2006 has been researching the Latin-American feminization of immigration to Europe and to the United States of America.

My film’s focus is the immigrant woman worker; it shows how she reterritorializes the experience of isolation, prejudice, and stereotypes and it evokes her social struggle and cultural resistance.


Could you explain how you work, what themes or concepts you use and what is important to you?

Previously, I had been conducting research related to the image of immigrant women in When the Garcia girls lost their accent and ¡Yo! By Julia Alvarez and have since been exploring the paradigm of immigrant women in the work of Sandra Cisneros, particularly in her novel Caramelo. This has served me as a theoretical foundation.
Since then I have recorded the testimonies of Latin American women immigrants in Spain and have produced an experimental audio installation "In or out? " and the video performance "Jet lag, The Garcia girls do not lose their accents", among others. I have also been collecting and studying the icons and images used by the media to positively and negatively represent the image of Latin American immigrant women in this country.


How long do you usually work on one project?

It depends on the project. I usually start researching about the authors, writers, and documents related to my themes. In this case, I recorded testimonies, took pictures, and made interviews. After that process, I started filming the first images. This required hours and hours of filming just to produce 3 to 5 minutes of final footage.


Do you carefully plan the production process or do you work more intuitive?

I start with a plan, but some where in the process I change my perspective. So, I suppose that is when intuition kicks in.

I usually work around a specific idea. I brainstorm and write down my ideas on a corkboard. Then I play with the words related to the main idea. I explore topics, feelings, and concepts trying to reduce them and come up with my title.

Mainly I finance my projects alone, but have been fortunate enough to receive a few grants.

It helps a lot to introduce people; they complement the images. Silence is important, too. It helps create a melody. I like to experiment with the audio, incorporate voices and typical Peruvian sounds.


How would you describe contemporary videoart?

Videoart is an open media that allows you to explore, resist, guide people, persuade and also inspire them with images. However, you only have a few minutes to catch their attention. Given this time frame, you must find the right way and the real moment to connect.


Did the web changed your view on art, or your career?

Yes, webart changed my career; but, I am happy about these changes. I like being able to reach people in a click. That is awesome!

Their feedback is so important. I consider each commentary, item by item. Sometimes this leads me to reconsider my work, revise a section. When I have finished a video, though, I generally send it to friends with different backgrounds, living in different cities. I send a video without title, just the idea, just the final footage. When I get their feedback, questions, opinions, sometimes I am real surprised. It’s always helpful, though. It is a premiere by email.

My next project is about childhood.
< overview< Artists interviews