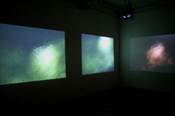 16:16, 2008, Video Art
A score for four waters
audio-visual installation
“thus, water is the gaze of the earth, its instrument for looking at time.”
-- Paul Claudel

Audio- visual installation stresses time component of the video medium. it borrows terms and measures from musical vocabulary developed through its long history of existence.

The content and subject of the project is water. it is water’s movement and repeated periodicity, pattern and symmetry of four videos, projected on four screens in an irregular canon that create rhythm and dictate cadence this time, not music (sound).

Who is Ana Pecar?
A.P.’s feet stand on the shoulders of many humans and non-humans, but her gaze looks for the unseen.


Your film is about?
My film is about water. I’ve put aside all the notions about this element and went to rediscover it with the camera – a partly objective tool. On many early mornings, I followed a big river that springs on a field near the Alps in Italy, flows through many hydroelectric power stations on its passage and crosses the town I live in. It is no particular river but it allowed me to dive into many secrets of water substance.
The film is also about the rhythm. Water bears the time within its very nature. And so does video. Four screens mimic the water’s movement and cadence.


How did you start with film? And do you have an educational background in art or film?
I thought I would know more about the world if I’ll become familiar with its basic elements. My initial idea was to observe air, earth and fire as well.
I do have a background in art and art pedagogy.


Could you explain how you work, what themes or concepts you use and what is important to you?
Foremost, there is this basic question: why do art? To explore the world and to reveal its beauty. In this sense it is important to me to reach broad audience and I had so far found in situ or public intervention most effective forms in doing so. Online exhibition can certainly reach global audience, but I am a bit afraid that it will deprive spectators from the full experience.


How long do you usually work on one project?
Around 3 years.


Do you carefully plan the production process or do you work more intuitive?
The nature of my work is very much intuitive. But I intentionally push myself toward structure. There is an initial idea, but the core essence shows up at the end of the process, because I do want nature of things to speak for themselves and not to force some preconceptions. The same applies to the theoretical part. I always do a lot of research. About the subject and about the rhythm, light… A clear idea forms gradually along with appearance of the work.


How does the title relate to the work, and how do you find a fitting title?
A fitting title is a metaphor of work’s resume.


How do you finance your projects (by yourself, sponsors or subsidy)?
I try to draw the funds from many different sources (foundations, state funds, municipality funds and institutional fees).


How important is sound in film, and if you use sounds, do you create your own or use existing?
Sound is of equivalent importance to video. I treat them both the same. I do capture my own sounds.


How would you describe contemporary videoart?
I find the following notion quite interesting: live cinema does not only reproduce life as something fixed and unchangeable but rather co-creates moments within the constant interaction with the environment. I think this is where we (the society) are now – and this particular segment of video art very well coincides with the contemporary.


Did the web changed your view on art, or your career?
Yes, certainly. Interaction with artists, institutions and audience grew from local to global.


How important is the reaction to your film by the audience?
It is like one side of the coin. Indivisible from the project.