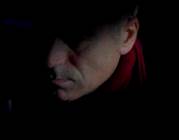 12:46, 2006, Experimental
In Amok, we meet Joe, a middle aged man having an identity crisis. He pursues an elusive woman through an increasingly strange landscape. The dream-like, surreal imagery is all taking place in Joe’s mind as he undergoes a sex change operation.
DirectorStifani BrothersProducerManassah HarrisWriterStifani BrothersCameraStifani BrothersEditorStifani BrothersCountryItalyEdition2007 < overview

Who is Brothers Stifani?
Stifani Brothers are a jarring, on the edge and well executed duo who will continue to perfect their style and art form well into the professional media and artistic arenas.


Your film is about?
Amok, is a metaphysical surreal film about the transitional memories and thoughts of Joe before a sex-change operation. The film is a story told in Joe’s mind.

Joe is a middle aged man with an identity crisis. He realizes that he is right in the middle of his life-journey thinking that now he is getting closer to death every day. He is becoming cynical towards his existence and has nothing left to live for. Though nothing makes his life exciting, one
Day at work while serving food to some costumers in his restaurant, a beautiful woman passing by the window-shop completely enlightens Joe’s life again. This finest and yet least probable event turns Joe’s existence upside-down. He believes now, that the one concrete certainty in human life is love. Love that he has never had but once gained and given will fulfil his life.

Joe will go through a journey full of obstacles and dangers to conquer the woman of his life; He will only be taken away from all his worries, anxiety and identity preoccupations when reaches her and finally be with her.

At the moment of conquering his love, Joe wakes up from the hospital bed he had been sleeping on, during the sexual operation.

Joe’s life is now fulfilled. She is a Woman.


How did you start with film? And do you have an educational background in art or film?
Born on the 13th of September in 1980 and raised in a small place in the south east of Italy, the two twin brothers lived most of their lives dreaming on films.

’In the beginning of our cinematic interest there was editing.
With it we could express and explore through images our artistic endeavour and increasing our cinematic interest. In time the urge to learn more about film making led us to go to England in 1999 where we studied Media Production at the University of Northumbria in Newcastle. The experience in those three years of artistic experimentation has given us full confidence on our editing abilities but more importantly projected our interest towards the art of directing.

During our time at University we mainly worked on digital video mediums and produced a variety of short films and animated work. However in Amok, our very first written, directed and edited project our vision and style is brought to the forth. ’