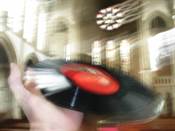 In the studio and on location, long photographic exposures, often with a camera in motion, were used as a means of invoking the space and time of this analogue cultural existence: early days of collective family listening; rushing down to Woolworth’s with pocket money to buy singles; the flowering of sexual identity in post-punk teens; and the civil disobedience during Thatcherite Britain.
DirectorConstantine GrasProducerConstantine GrasCameraConstantine GrasEditorConstantine GrasCountryUnited KingdomEdition2011 ScreeningsPortobello Film Festival, 2011
Photomonth 2011, East London International Photography Festival< overview