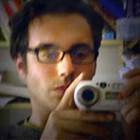 10:00, 2006, Experimental
The storytelling [in Futuristic Toys] aims to be a reprise of a certain futuristic representation, a grotesque tale of the lack of psychology in this type of dramatic scenes, and which would spark a sense of loss and amazement in the viewer, still remaining in a dreamlike vision.
DirectorClaudio CastelliCountryItalyEdition2006 < overview

Who is Claudio Castelli?
I finally got my MA degree in Industrial Design last November at Politecnico di Milano, and this was my "thesis project".
Before that, I was born in Siena, the 2nd march of 1979, but i always lived in Grosseto till i was 19, where i had a "classical" highschool education, studing Latin, ancien Greek, philosophy, french, story, italian medieaval literature etc. (But not English :) )
After that, when I was 19, i moved to Milano, to attend "design" at Politecnico.

After 3 years spent there, I felt I wanted to see more, so, first I did an Erasmus project in THEI of Athens, for 6 months, where I had a wonderfull time (and i ’ve got some traditional art skills-specially sculpting and quick sketch), after that, I went to Kyushu institute of design (Fukuoka, Japan), where I stayed one year, having the occasion to jump in every course, from computer music to sculpting, digital arts etc... Enjoying the big cultural difference (a very strong and exciting experience) and starting working for first time in "my field", as illustrator and video-artist. Beeing away from Italy, SPECIALLY when I was in Japan, I realized, maybe for first time in my life, about my "roots".

When I came back to Italy, I took a little time to re-adapt myself living in my country, I took time to find a cheap place where to stay in Milano (every year more and more expensive)and to make the VERY TECHNICALS exams I still had to do. It was a torture, cause, since I was in Greece, I dedicated myself to painting, sculpting and computer art. After looking for a while, I finally found a professor, Marco Maiocchi that accepted my thesis (this was integrant part of it... Doesn’t match well with the term "design", maybe... But this was what I wanted to do). Besides that, I made other shorts (a few "free" and artistic, one for "enel", italian electric company), recently an abstract video for a promotional installation in "fiera di Milano", and I have been the director of a multimedia photo exposition shot by Paolo DelPapa. I’m also “crafting” a few websites, (to get some money) some promotional video for events, the design for an “artistic” glass and some paints…

Currently I’m back in my town, Grosseto, enjoying the beautifull landscape, my family, the possibility to go to the beach by bicycle.

I’m preparing a personal exhibition (with paints and videos), and a new cg Short related to Odysseus...


Why filmmaking?
I always had a passion for writing and drawing comics (specially during classes, at school).
When we write, we have the possibility to express our feelings and share with others.
But, of course, only with people able to understand my native language.
Filmmaking, specially when we use images to tell storys, can give a me "universal" language!
Been in countries where I had hard time to use words to express my feelings, emphasised this feeling.


Giocattoli Futuristi is about...
The idea about this movie came out at first when i was in Japan, i think, and materialize itself when I went back to Italy.... We live in a world where "specialization" in a field it s all.
And we get to become like "machines"...forgetting about other important things in our lives.
My movie is full of symbolism, maybe too much to get well understood at first view.
There is a first part, when our "hero" wakes up in his room and walks in his little town.
The town won’t be idyllic at all: it s full of "grotesques" vision, like the "blind" policemen (who looks full of authority, with pigeons and he can t see that on his back a man is getting killed), or the suicide scene, after witch the "priest" comes out and with his "benediction" saves the world from the EVIL (or maybe it s just the rain that do that), for running away later when 2 scary guys comes out to menace him.
Or other things like the "bar scene" where people fights all drunks to forgets about their problems.

Later the "city" where he goes to work, will be full of mechanicity, with some exceptions, like when our hero "become a dog" (his "vitalism" wakes up in his desperate mind), or when he pass in darks dangerous street having tooken the "wrong exit" at the station, or when, falling with the trash, he only haves a second to see a "love" in his mechanic life. Etc Etc.

The movie gets visual inspiration from Depero’s paintings, with some narratives elements taken from Pasolini movies, or "classic " novels from Manzoni’s "promessi sposi".

It also comes out from our working environment here in Italy, full of "stages", "internships", "training on the job" : young graduates doing that won’t get anything, neither money (they don’t pay anything, of course) or fame (the "studio" will sign the project, usually without even writing the name of the "real" designer).

I really don’t like that. While I was in Japan, I got payed for the works I’ve done, even having an "internship contract". So, since here I won t get money anyway, and "boss" will usually know even less than me, better to do something I really like, in witch I believe and could possibly give me some exposure!

I also think that the world would be interested in seeing "Italy", rather than a squalid tempt to emulate a PIXAR production


Financing your movie?
Ahah! Who would finance something like this? Even more famous artists have a very hard time to get financed, so often the only Italian movies that could come out in a " theatre" are those that will have a SURE appealing to big public: naked women, stupid jokes, etc. A very few Directors, even without found, can make something big (like Benigni, for example), because they have a big carrier at their back...

So, at least, using only cg I didn’t have huge expenses....it was also my thesis project, so, i think
Its normal even not trying to ask for founds.

After that this movie have been selected as the only Italian candidate at Imagina awards in Montecarlo, I tried to write to our "national Cultural department", about the idea of financing my new project, but still I haven t get any concrete reply.

I started working on it anyway. Even superheroes in comics they work-fighting the crime for free.... But usually they have some solid business on their back (like batman, for example). Me, I don’t. That s why I try to make some little money making websites, and from July I can apply to teach something in a high school. Hope that getting some exposure, someone will like my style, and possibly will give me the possibility of earning some money doing what I love doing.


New Media; a challenge for film makers?
New Media are a great source for film makers. Both to exit from their "isolation", no matters where they live, meet some interesting people in their field. Having the occasion to get trained on technics and have a good overall vision on what the rest of the world is making. I don t think that new media are overrated at all.


Individual film making or co-operation?
I worked in team, before, and i had good time doing it. The only concern, doing "videoart", rather than movies, is that emotions and feelings are really "individuals", so, it s really hard to communicate to the team, specially if, like in college, everyone want to be the "director". In a different environment, as in a Team of "specialist", that could be different.
My speciality, i don t know.. I think I’m a good problem solver, for finding technological solutions, I have some taste for arts, and I’m very calm and listening person..., and i get quickly many "creative"ideas, so, i would say, maybe art director? (Nice to make compliments about ourselves :) )

But, for the kind of works I’m making now, the only way is "individual". I’m really "picky".


Plans and dreams...
I don’ t know exactly. I wish i can survive making something i really like to make.


Digital or classic?
Both: digital and analogical. I own a mini dv video camera, but i didn’t uses in this movie...


All other remarks
What ever is left to say...
I only wish that my country would love me as I love her (very cultural citation, is what says J.J.RAMBO in "First Blood")< overview< Artists interviews