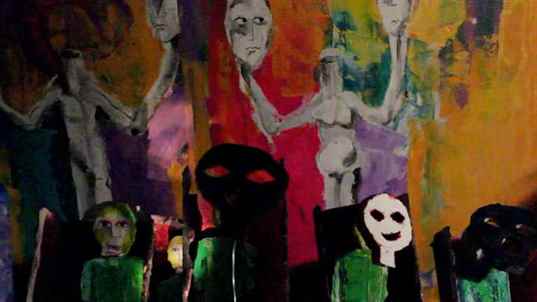 Who is Carl Knickerbocker?
I am an artist living in Oviedo, Florida, United States.

What is Sp #6 about?
Bit of a replay of the Fall of Man, Christian variety, and the subsequent madness of thinking about religion as a lifestyle.

Could you explain how you work, what themes or concepts you use and what is important to you?
Been doing the "SP" series of shorts since 2011. Broadly, the themes are the "Human Condition".

How long do you usually work on one project?
About a month.

Do you carefully plan the production process or do you work more intuitive?
I plan the production to a degree, making paintings and props/puppets for the project. In editing there’s usually something that sidetracks the plan and that’s a good thing.

How does the title relate to the work, and how do you find a fitting title?
Since 2011, I’ve completed eight shorts in the "SP" series. "SP" stands for Suburban Primitive.

Where do you get your ideas or inspiration from?
My academic background is History and Sociology.

How important is sound in film, and if you use sounds, do you create your own or use existing?
Make my own soundtracks.

Did the web changed your view on art, or your career?
Web hasn’t changed my view on art. Career... Hard to say. What has changed my art direction/career is the computer. Five years ago I wouldn’t have had a clue that I could make movies.
FYI. I shoot with Canon T3i, edit on FCP X, create and perform the soundtrack on Garageband. Thank you Apple!

Where would you place your work; cinema or art. And what is the difference between those according to you?
This is probably a semantics situation. In the broadest sense there is ART and all the sub-categories below... Painting, music, film etc.
The work I’m doing now is cinema/film/video that happens to have an artsy feel to it.

How influential is the reaction to your film by the audience?
Very little if nothing. It’s nice when people like what I’m doing, but there disposition to my work won’t affect what I’m making. I’m doing this work because it entertains me. I do publish the work and send them to festivals etc, an artist must find an audience, and hope to get a reaction to the piece, but the audience doesn’t compel my direction.

What is your next project about?
(writing this November 2013). Currently shooting SP #10.