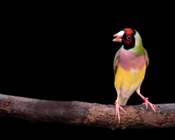 2:17, 2008, Video Art
Theo performs a ritual in a pitch-dark ambience, using a remote control and a lady bomber hat - initiating a psychedellic evocation. Four continuously recurring objects made of wood, modelling clay and feathers serve as metronmomes in a rotating spin dazzle of gaudy amaranths, death symbols and ritual fans.
The spoken texts in the first and the last part are cut ups of a radio interview with mutsumi kanamori (aka mu) on „beats in space“.
In the middle part we hear a fretty lion in a zoo; and birds bleeping.