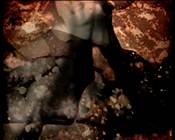 4:11, 2009, Experimental
"dead SEEquences" is a video composed of 3770 frames. Working frames by frames, we find that nothing happens inside each single image, but all pass between the frames, in the invisible gap that separe a frame by others. The film is here, but there isn"t something to see, the most important remain invisible and uncertain. There is no truth to discover. The truth is always elsewhere.
This is a study about the vanishing of an image. It"s the image of a naked body, the most tangible and real thing for a human being. Not a body, but the image of a body. In this gap operate the principle of disappearance: between the object and his image there is a distance, a limit, a separation; this is the functioning of language, the only way we know to relate with the world and the others. Between each word and his meaning we find this distance as an original sin, a gap where the world disappear to be speaked. To communicate, the world and the human being have to disappear. For this, the art have to become "uncommunicative" and "uncommunicable".
DirectorFabio ScacchioliProducerFabio ScacchioliCameraFabio ScacchioliEditorFabio ScacchioliCrewMusic by Vincenzo CoreCountryItalyEdition2009 ScreeningsNational Center for Contemporary Art - St.Petersburg (Russia).
Videoformes - Prix de la Creation Video 2011. Clermont Ferrand (France).
La Porta Blu Gallery - Rome (Italy). Solo exhibition.
Moves - International Festival of Movement on Screen. Liverpool (UK).
EMAF - 23nd European Media Art Festival. Osnabrueck (Germany).< overview


Your film is about?
I hate to speak about my works. Add words to the film connote it artificially. Film is an autonomous language, what the film express is in the pictures, in what they show, and in what they don’t show above all.
But I can speak about the technique: dead SEEquences is composed of 3775 frames from an old 16mm amateur film. I digitalized the film, printed the frames on photographic paper, and I treated manually each frame. Then, I re-filmed all frames in the originary order, that loss all originality.


How did you start with film? And do you have an educational background in art or film?
I was 8-9 years old, I started with an Hi8 camera. I remember I want to film all world!


Could you explain how you work, what themes or concepts and what is important to you?
The concepts are memories, perception, and thought. Make a cinema of thoughts. I’m also interested in error as a method, in loss of quality processes, and in the distance about the image, the world, and the human eyes and brain.


How does the title relate to the work, and how do you find a fitting title?
The work shows the vanishing of an image, and also is important the aspect of perception, the act of seeing. Dead SEEquences.


How do you finance your projects (by yourself, sponsors or subsidy)?
By myself only. I’m looking for sponsors or fundings, do you know someone?


Nowadays everyone with the right equipment can create videoart, good, bad or ugly?
Easy access to equipment don’t means more quality. However, it’s a good thing to approach visual art.


What possibilities of the web are yet to be explored? Which dangers do you see ahead?
Distorted and not conforming use of technology is only salvation from intellectual massification.


In what category would you place your work; cinema or art. And is there a difference between those?
I like so much place my work exactly between cinema and art!!!


How important is the reaction to your film by the audience?
I don’t know. I suppose is important, but I can’t control this aspect. When I create something, I don’t think about spectators.


What is your next project about?
It’s about dreams and Bosnia-Herzegovina.