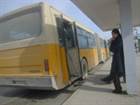 4:00, 2014, Documentary
Interrupted Movement Tunisia is an APP project that explores the current dynamics in the new society of Tunisia after the revolution of 2011 through the voice of Rosa Negra, a young Tunisian dancer, as she tells her story of self-expression in this society in flux. Using video created from still photography as its visual medium, Interrupted Movement Tunisia captures the chaotic interactions and intimate moments of anonymous individuals on the streets in different regions of Tunisia.