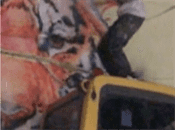 1:55, 2011, Experimental
Drawing on his new and evolving body of imagery depicting human and animal figures, Gaias work reflects on the ancient themes of animal
and human sympathies, but now in the context of the city and the human built environment. Working with myth and symbolic animal figures,
Gaias street murals are like the works of an urban shaman drawing on a positive force from animal protectors. Gaia employs recognizable animal figures to remind us of lost human connections to nature and the environment. He constructs an image of a reversal of the "natural order" where animals intervene as protectors
and avatars for a new awareness of the human condition in the natural world. He is known world-wide for street murals placed in areas to elicit surprise and reflection by passers-by who encounter the symbolism and fragile narratives of his work.

The first of five pieces for each quadrant of the city. The hybrid of the Tiger and Rabbit signifies the annual transition in the Korean calendar. Furthermore, these archetypal symbols of aggression and submission address the hierarchy of japanese colonization and contemporary korean identity. Situated in Hongdae,
the center of Seouls fashion and nightlife, the neighborhood is the confluence of traditional korean culture and American influence.
DirectorGaiaProducerGaiaCountryUSAEdition2012 < overview