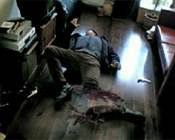 3:20, 2007, Animation
Killing people can be great fun, and it-s artistic too! A short uncensored journey into the raw world of modern art. A violent world, shocking, not for those of a tender disposition.
DirectorJasper ScheepbouwerProducerIdemWriterMe, Hc SmuldersCameraIdemEditorIdemCrewHC Smulders
Barry Annes

Who is Jasper Scheepbouwer?
A freelance artist working in 3D animation and visual effects for film and television. Also a sometimes independent maker of short films, music videos and the like.

Your film is about?
Nothing much, it’s some sillyness to provide me with an opportunity for trying out all kinds of animation ideas.

But, on the other hand, it is also a bit about my dislike of modern art, or to put it better: the mystifications that are a part of it. I thougt it would be fun to show Mondriaan and Picasso as two ultraviolent machos, tied up in a deadly conflict on who’s the best artist.

How did you start with film? And do you have an educational background in art or film?
I started out by trying to make animations on a super-8 camera when I was 16. With Tex Avery, Chuck Jones as inspiration. I did go to artschool but not in the film department, I did painting and printing. The filmeducation is by watching other people’s work and trying to figure out how to do it myself.

Could you explain how you work, what themes or concepts and what is important to you?
I like the idea of being able to grab an audience by the balls: first let them believe it’s entertainment, then show them something about themselves that they’d rather not face up to and then either give a release or offer some sort of other climax. If you can make someone feel that it mattered seeing your film that would be the best.

It doesn’t always have to be that way, but in general I feel the purpose of art is to evoke emotions and film does that the strongest for me, so that’s the reason for me to make films.

How does content relate to the form of your film?
For me, art is the thing where form and content are the same. They’re not everywhere else in life, that’s why it’s such an intrigueing thing. Anyway this film is not that artistic, it’s a bit silly.

How did the film come about? Everything (carefully) planned or more intuitive?
The whole story is made up as it went along, and lots of details were added all the time. That’s why it’s silly.

How do you finance your projects (by yourself, sponsors or subsidy)?
This one was not financed. I’ve tried subsidy in the past, but not with any success.

New Media; a challenge for film makers?
I don’t know what new media is, if you mean computers and the tools they offer for making and distributing films - hell yeah, I wouldn’t be able to do this without them. Not a challenge but an opportunity.

How does the internet influence contemporary art in general according to you?
For short films, it’s the most ideal platform yet. So that artform will benefit.

What possibilities of the web are yet to be explored? Which dangers do you see ahead?
The distinction between tv and internet will blur away... Traditional role of distributors will change, possibility of working independently from major corporations grows. The danger is that we’ll be flooded with crap and the quality stuff will get lost underneath that.

YouTube? Why or why not?
Just a phase. Youtube will at some point be indistinguishable from television in it’s image quality and delivery of content. Apart from the staggering amount of talentless nonsense that’s on it. But hey, watch Dutch television and is that any different?

Does your work often circle the festival circuits, and do you visit festivals regularly?
No. But I always plan to.

Do you often meet and discuss with other film makers through the internet?
Yes.

What is your next project about?
I’m working on a music video with a friend. Subsidized, this time. It’s about a little girl and her freaky softtoy.