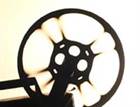 2:55, 2006, Video Art
Reel is a digital video about film and its obsolescence as a representational technology.
DirectorLynn CazabonCountryUSAEdition2006 < overview

Who is Lynn Cazabon?
Lynn Cazabon is an American artist based in Baltimore, MD who works in video, photography and installation. She is an Assistant Professor of Art at University of Maryland, Baltimore County.


Why filmmaking?
I still distinguish between ’film’ and ’video’, although lately these words have become interchangeable in popular use. The work I am presenting is video, however, its content and subject is film. I choose media that is most appropriate to the particular project or idea I am working on.


Reel is about...
Reel is a digital video about film and its obsolescence as a representational technology. It shows a profile view of a film reel in fast motion while the audio is in real time. As the film becomes
Progressively smaller on the reel, the light behind the projector gets brighter, dematerializing and optically transforming the image of the reel as it turns. The resulting image appears at times to
Stop, turn backwards, and pulse hypnotically. The singular nature of the image produces a Zen-like meditation on the materiality of film.


New Media; a challenge for film makers?
I am constantly asking the question: what is "new media"? It changes all the time. Certainly the shift from mechanical/chemical processes was a huge one and for myself, technology itself has become a large part of the content of my work. I am very attuned to the relationship between what I say and how I say it (with what tools or medium). For me, they are inseparable.


Do your films have style, just as some painters have?
Yes of course they have style. I would describe mine as minimal and (almost) static.


Individual film making or co-operation?
I tend to prefer to work alone. Perhaps because my training is in studio art and photography, I like having full control over what I make and this sometimes becomes difficult for me when I work with
Others. I think filmmaking on a larger scale (which I have also done) requires collaboration.