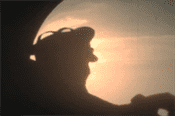 6:10, 2010, Experimental
Short experimental film made with 8mm footage, letters, notes and pictures I have collected. Essay about memory and the construction and reconstruction of history.
This is a story told by orphan objects.
DirectorLibia LazcanoProducerLibia LazcanoCountryMexicoSubtitlesEnglishEdition2010 < overview

Who is Libia Lazcano?
I’m someone very passionate about documentary film and documentary filmmaking. I’m from Mexico City, and I currently live there. I lived in Texas for three years while I did a Master in Fine Arts in Radio, TV and Film at the University of North Texas.


What is Mimesis about?
Mimesis is about orphan memories. The movie is composed by very personal objects: family photos, home movies, personal letters and other objects that were abandoned by their original owners. In a way is sad that these objects have left the families they used to belonged to, but it’s also a great opportunity because strangers like me can give them a new life, I can claim them as mine. I can give them a new meaning. These objects are left to be re-created by anyone. They come with their own baggage, and you can add to it.


How do you choose the subject of your work?
Well, with Mimesis, I practically stumbled upon it. While I was living in Texas, in Denton in particular, I discovered garage and estate sales. Something I never saw living in Mexico. People sell everything and anything there. I was surprised to find that sometimes people let go their family memories in such sales. Then, I became fascinated by the possibility of "owning" these memories that were not mine. I got my hands on any 8mm footage I saw for sale, old photos, personal letters, even handwritten notebooks with cooking recipes Having those movies, pictures and letters, became an exercise for my imagination. I started thinking: who were these people? What did they like? What made them sad or angry or happy? You end up emotionally investing in these mysterious characters. There’s a lot of nostalgia that goes into watching old 8mm home movies... Then it became obvious that I had to do something with my collection, the natural thing being telling the story of these people. Rather, re-tell it in my own way. But I have to mention that historical research went into this...


When did you started working on this film, and how long did it take to finish it?
Once I had a good collection, which probably took me about two years, from 2007 to 2008; making the actual film probably took, five months.


Who is the narrator, and what role does the text play in the film according to you?
The narrator is basically me, but for the voice I hired a young man, whose voice I thought was appropriate for the film. The narration is basically the re-telling of the History and story. It’s very important for this film. I chose a young voice, because young narrators are non-authoritative and in this particular case, Brandon, who did the voice, could read the narration with sort of a natural nostalgia to it.


How important is sound or music in your work?
This film had to have music, because it adds to the atmosphere, the music has to help you notice the intimacy yet awkwardness of watching very personal footage of people you do not know or have ever seen before.


What came first, the text or the visuals?
The visuals, since I had all the visual material first. Then I tried to write an appropriate narration, that did, what I thought in mind which was this exercise of reconstructing History.


Where did you find the 8mm footage for this film, and was it yours, or did you have to pay to use them?
I got it in an estate sale, if anybody asks, I’ll say: fair use. :)


Did you have some struggles during the production of this film?
Yes, weaving all the material to fit the characters in something that the general public would recognize as Historically relevant, was the toughest part, even now I have my doubts about such a move and how it affects the story arc of the film. That’s only in the narrative level, because I have to say my historical researcher did a great job with the actual historical details of the film.


Individual film making or co-operation?
I think that also depends on funding.. Haha. But once you have a team you love to work with, that’s the best way to go.


What are you working on now?
I’ll start teaching, so I’m getting ready for that. I’m also a scriptwriter for educational programs and I also work with civil organizations, shooting docs with them and for them.< overview