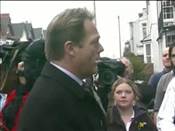 11:00, 2008, Documentary
Alex Kacheppa had acted in a film I had made a year before the police raided his house and I knew nothing about the situation his family were in.

When the news spread of his attempted deportation myself and a small group of his friends began making a film about him. As the story became increasingly extraordinary Alex revealed himself to be a remarkable young man.

When adults are critical of young people I recall Alex and his friends and how the adult world treated their belief that people in power would listen to them.

The film has been screened on BBC 2 and by the BFI.
DirectorPeter SnellingCountryUnited KingdomEdition2011 < overview