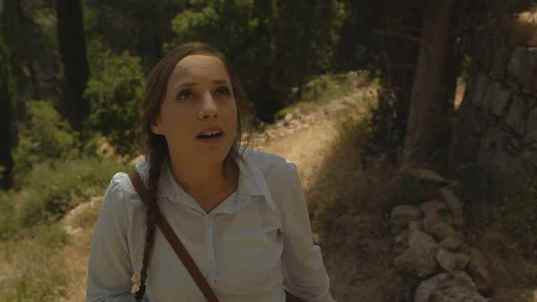 Who is Tomer Werechson?
Tomer Werechson is about to finish his BA in film and television in Tel Aviv university. During his studies he has written and directed many short films that were screened at festivals around the world and won many awards. These days he works as an assistant director at the Israeli TV Channel 1 and is the head of the video department of the Tel Aviv university student association.


What is First lesson in love about?
First lesson in love is firstly about innocence and secondly about a chance meeting of two opposite worlds. Boy meets girl, and religion meets secularism.
Tom is a young jewish religious girl that has her first crush, while every step of the way is mysterious for her and even taboo.
This is a young jewish religious girl’s point of view about love and yet, no matter if you are a male or a female, we all had this pure feeling of falling in love for the first time. This special feeling decorated with incredible innocence we can never forget.


How did you start with film? And do you have an educational background in art or film?
I used to work with my brother at the theatre and I remember after working very hard for a big show, finally the show began and I was amazed. We created all of this. Then I knew that I want to create on my own and film was the most attractive art for me. I got so inspired since then and new ideas for films are popping all the time.
The idea for this film actually started with the location. This mysterious tower in the film was a place where me and my friends used to hang out when we were teenagers and also was the romantic secret place to take a girl for a date.
This place brought some sweet memories from my youth and I felt I had to make a movie about them.
I made this film when I was in my third year of film and television studies in Tel Aviv university. However, I didn’t have any background in art before going to Tel Aviv university.


Could you explain how you work, what themes or concepts you use and what is important to you?
I don’t have one way of working. I write about what makes me get excited, things that make me laugh or cry. I love comedies, my next fiction film is going to be a comedy. I like looking at life at a funny way and my challenge is to put my point of view about life into my films. The most important thing to me is that people will enjoy watching my films. I also want my films to make people think and ask questions but, I believe the key for that is firstly to make sure that they enjoy watching my films and through emotion make them dive into the world I have created.


How long do you usually work on one project?
Months, sometimes even more than a year. Not because I am some kind of perfectionist. It is just that I am starting my long way in film and I always have doubts and thoughts about my projects. It takes lots of confidence to say " Ok I am ready. Lets shoot this film", but when it happens it’s the most amazing feeling you could ever feel.


Do you carefully plan the production process or do you work more intuitive?
I always try to predict the problems that may come up along the way. Obviously I can’t predict 100 percent of them, but since making a film is always a huge gamble, you must do your homework the best way you can.
It also helps you concentrate as a director when you know that the system surrounding you is working perfectly


How does the title relate to the work, and how do you find a fitting title?
The title "First Lesson In Love" relates to the first meeting of Tom, the main character with love. The guitar lesson becomes a "Lesson about love" If I may call it that way. I think that love is a never ending series of lessons that we have everyday. The first lesson of love is that love hurts. If there was a sequel called "Second lesson in love" it would probably try to tell us that although love sometimes hurts, it is still worth it.


Where do you get your ideas or inspiration from?
I get my inspiration from films I watch and from people around me. Sometimes I would just hear a conversation between two strangers and it could lead me to an idea for my next film. Stories are all around us, all we have to do is just watch and listen.


How important is sound in film, and if you use sounds, do you create your own or use existing?
Sound is one of the most important things in a film. Unfortunately it is underrated by most people since the quality of the video today is so amazing that people are drawn into the beauty of the picture and forget that a big part of thier emotions is literally lead by the sound of the film.
In this film I used sounds and music that a very talented sound designer named Shahaf Wagshall has created.


How does content relate to the form of your work?
My content is usualy not very critical. I like to tell a story that will make you feel something, think and ask questions. That is also the form of my work, very mellow and easygoing.


What possibilities of the web are yet to be explored?
The web has made an amazing change for young filmmakers. More and more opportunities and possibilities are adding everyday and yet it is still hard to make a living from films or any kind of art through the internet. However, the web is so liberal, it gives you absolute freedom to create your art.


Did the web changed your view on art, or your career?
The web is an absolute gift for me. It gives me high hopes about my future and career and also opened some doors for me. As I as said, I still can’t make a living out of it but I definitely find tons of opportunities everyday on my way to being successful.


Where would you place your work; cinema or art. And what is the difference between those according to you?
I don’t see any difference. Cinema is art.
Art as I see it is a unique creation of emotions. Isn’t that what Cinema is all about?


How influential is the reaction to your film by the audience?
The reaction of the audience is very influential. After all, a film is made for the audience. Their reaction is my "Grade" for my film. To be honest, I like to hear people that like my films and people who don’t, because then I could get a better perspective about my films and can improve the following films I make.


What is your next project about?
My next project is a short documentary about my grandfather. The film is about his achievements in life in contrast to the emptiness and uselessness he feels now when he is old.