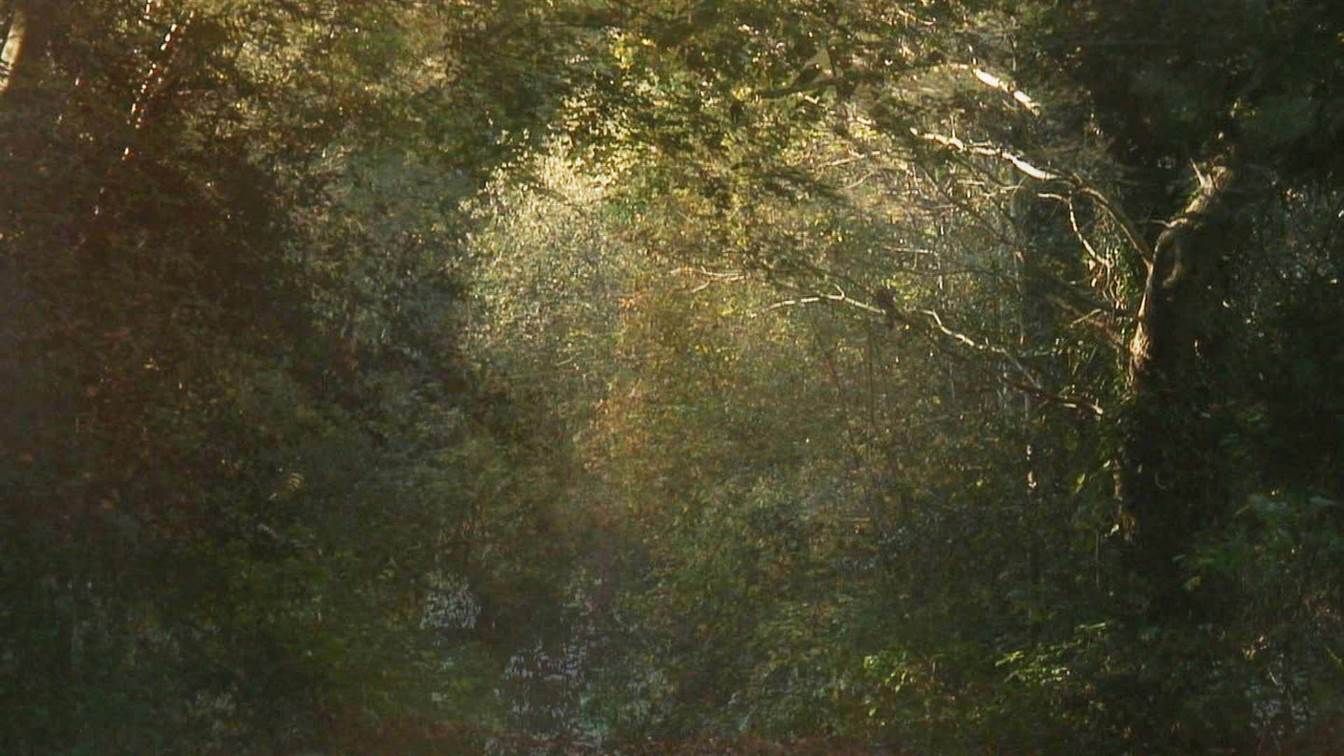 4:24, 2012, Experimental
A pastoral dream-zone of autumnal forests and dark abiding groves conjured with the hallucinatory intensity of a death-bed reverie.

The Secluded Grove features an original soundtrack by Abi Fry.

Who is Toby Tatum?
An artist living in Hastings on the British south coast, who makes films.

What is The Secluded Grove about?
A pastoral dream of a lost England, full of golden forests and dark secret groves.

How did you start with film? And do you have an educational background in art or film?
I made the first forays into film shortly after leaving school, inspired to some degree by the film program Moviedrome, which screened on British TV in the early nineties. Moviedrome showed two cult films back-to-back late at night. Staying up watching those films constituted a film education of sorts. Later I went to art school and studied painting so the films eventually assimilated some painterly characteristics. The Secluded Grove, for example, took on aspects of Romantic landscape painting.

Could you explain how you work, what themes or concepts you use and what is important to you?
I basically make films on my own, shooting digitally and editing at home. For the last few years I’ve worked with a composer, Abi Fry from the band British Sea Power. The films cost almost nothing to make. Each film, for me, addresses a series of ideas that I’d have been mulling over for several months, although not all of those may come over to the viewer. Central to the whole practice is the idea of an artist being able to create worlds of their own, self contained universes that abide by their own limits and rules, that exist to some degree independent from the wider world.

Do you carefully plan the production process or do you work more intuitive?
I wouldn’t say I plan it as such but I do spend a long time mulling things over before beginning. When I’ve started though it’ll be pretty intuitive in terms of shooting and editing and don’t mind discarding certain ideas if they don’t seem to be working. Films take on a life of their own and you’ve just got to help them along...

How does the title relate to the work, and how do you find a fitting title?
Usually the title becomes known during the production process, maybe sometimes before. The Secluded Grove refers to a kind of internal landscape, one perhaps inaccessible to others.

Where do you get your ideas or inspiration from?
Hard to say for definite, from the ether maybe?

How important is sound in film, and if you use sounds, do you create your own or use existing?
I tend to work on the images first and then address the sound afterwards. I suppose I think primarily in a visual way and so the music always follows after. I’ve always worked by having original sound, most recently I’ve worked with the composer Abi Fry on the film scores. We’ve developed a relationship whereby it is quite easy to communicate ideas between each other without necessarily putting them into words.

Did the web changed your view on art, or your career?
I’m someone who has benefited enormously from digital technologies and the internet. I’m basically running an autonomous film studio from a room in my house. When I first started making films there were all sort of prohibitive costs and the whole technical aspect of making films seemed somewhat forbidding. In the time I’ve been making films things have changed a lot and, for me, those changes have been positive ones.

Where would you place your work; cinema or art. And what is the difference between those according to you?
Cinema or Art? Maybe neither, or both, or somewhere in between. The works have some cinematic elements, and I’m not sure if the wandering-in-and-out arrangements of gallery-type screenings would entirely suit my work. Having said that there is something to be said for seeing the work in isolation, rather than as part of a programme of shorts for example. I’m quite happy to show in either context at present, at least at the moment, considering each screening option on it’s own terms.

How influential is the reaction to your film by the audience?
If I’m honest I’d say I want people to watch, and enjoy watching, my films. That said mine isn’t a commercial project and so the films don’t need to please a large amount of people. I suppose I’m making a sort of minority cinema and one that, I imagine, has a limited audience. Perhaps my ideal screening environment would be a Lascaux-type set-up. At Lascaux cave there were a number of chambers that were used for different purposes, some for communities to gather in, others for more isolated vision-quest type experiences. If I think of a place where my films inhabit, and where I see them operating, it is more towards the isolated end of things.

What is your next project about?
I’ve just finished a film called Monsters, a Victorian-era take on the dinosaurs. It is set in a monstrous garden full of overgrown flowers and foliage, populated by statues of the giant lizards of days gone by.
< overview